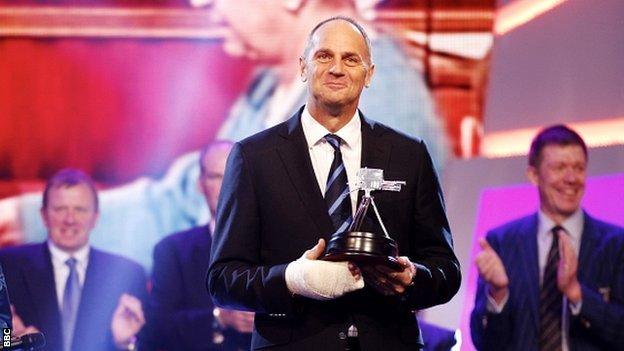 Three former BBC Sports Personality of the Year nominees are included on the expert panel that will determine the shortlist of 12 for this year's award.

Sir Steve Redgrave, Baroness Grey-Thompson and Denise Lewis will be joined by Baroness Campbell, chair of UK Sport, and representatives from the BBC and the newspaper industry.

They will aim to produce a shortlist based on reaching a consensus view.

The winner will be announced at ExCeL in London on Sunday 16 December.

Presented by Sue Barker, Gary Lineker and Clare Balding, Sports Personality of the Year will be broadcast live on BBC One, BBC One HD and BBC Radio 5 live.

A capacity crowd of more than 15,000 will make it the biggest Sports Personality of the Year in the show's 59-year history, with tickets going on public sale at the end of the month.

Full ticket details will be on the BBC Sport website closer to the date.

The event will bring down the curtain on what has been an historic 12 months of sport, highlights of which undoubtedly include the London 2012 Olympic and Paralympic Games.

But 2012 was also the year that saw Wales secure their 11th Grand Slam in the Six Nations, Andy Murray's historic US Open triumph, Manchester City's remarkable comeback to win the Premier League title, Chelsea's Champions League victory, Bradley Wiggins' Tour de France triumph, Rory McIlroy's record-breaking win at the US PGA Championship which cemented his status as the world number one golfer, and Europe's sensational eleventh-hour victory over the United States in the Ryder Cup.

Barbara Slater, director of BBC Sport, said: "This year's Sports Personality of the Year will be a celebration of what has been a truly unique year for sport in the UK. We are incredibly proud to be hosting the sporting grand finale for such a remarkable year."

With an increased shortlist from 10 to 12 - in recognition of the unprecedented success of UK athletes in 2012 - this year's battle for the coveted title will be one of the most hotly contested in the show's history.

If the expert panel cannot reach a consensus view as to who should be included on the shortlist, they will be asked to vote on the remaining candidates. In the event of a tied vote, the chair's decision will be binding.

The public will once again vote for the winner during the live show, with the result announced at the end.

The panel will also choose the first, second and third places for the Team of the Year, Overseas Personality of the Year and Coach of the Year awards.

Other awards on the night will again be Young Sports Personality of the Year and Unsung Hero, which will continue to be decided by the existing specialist panel system, and the Lifetime Achievement and Helen Rollason awards which will be decided by the board of BBC Sport.