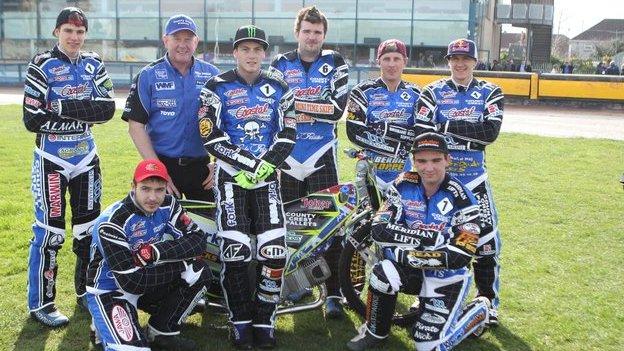 Poole Pirates rider Darcy Ward says he is honoured to be leading the Elite League champions this season.

Ward, 21, was stand-in captain last season when Chris Holder was injured but was handed the role full-time in the winter ahead of the 2014 campaign.

"Last year I stepped in for Chris and I enjoyed the honour and the experience," Ward told BBC Radio Solent.

"I look forward to starting the season off as captain. I want to keep the boys happy and keep myself happy."

The Pirates have added several new faces to their line up this year.

"It's exciting, we've got a couple of new faces and a couple of old faces so I look forward to the young team we have got," said Australian Ward, who will also race for teams in Poland and Sweden this summer.

"We've had a good team spirit in recent years and I'm sure that won't change this year.

"It's a long season and we need to stay focused and we know it comes down to the last half of the season."

Meanwhile, promoter Matt Ford says he expects Poole's main challenge to come from Eastbourne or Kings Lynn this season but is again confident of glory.

He has also not ruled out former captain and world champion Holder appearing for the Pirates this season.

"I think Chris will miss it greatly, I don't want him riding for anyone else so, what I would say is: watch this space.

"I don't want to loan him out to anyone else.

"He lives in Poole and the reason he chose not to ride Elite League was because of the amount of fixtures he had.

"You never know what tomorrow is going to bring and I know, if we were to take an injury, he would help us in a heartbeat."

Poole begin the defence of their Elite League crown against Eastbourne on 9 April at Wimborne Road.