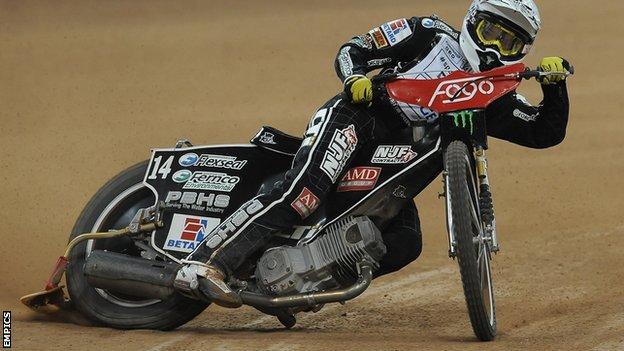 World champion Tai Woffinden has agreed to return to Wolverhampton Wolves for the 2014 Elite League season.

The 23-year-old, who first rode for Wolves in 2009, became the first Briton to win the world crown in 13 years when he clinched the title in October.

Get to know Tai Woffinden

"The expanded fixture list in the UK meant that it wasn't simple for me to stay and ride here, but I'm pleased it's worked out.

"It's a great feeling to be back with Wolverhampton," Woffinden said.

Born in Scunthorpe, he grew up in Australia, but returned to England in 2006 to pursue a speedway career and went on to win the British Under-18 and Under-21 titles in successive years.

He was part of Wolves' Elite League title success in 2009 and subsequently replaced Freddie Lindgren as the team's number one rider.

Woffinden became Britain's eighth world champion - and the third Wolves rider to do so after Ole Olsen and Sam Ermolenko - at the season's final Grand Prix in Poland despite suffering a broken collarbone.

And Wolves owner Chris Van Straaten was delighted to secure his services for another year.

"I'm relieved and delighted to have Tai back with us for next season, it's fabulous news for Wolverhampton and British Speedway in general to have the world champion riding here," he said.

"It's taken a little longer than I would have liked because, naturally, Tai has a lot on his plate and lots to consider.

"He is also looking at the best way to make maximum use of the fact that he is world champion and early in the new year we will also be looking to bring in some sponsorship to help with his British racing."

Van Straaten added: "He was pivotal to our team plans, we knew the signing of Tai would dictate which way our team building would go and we now know what we are left with for the last two places."