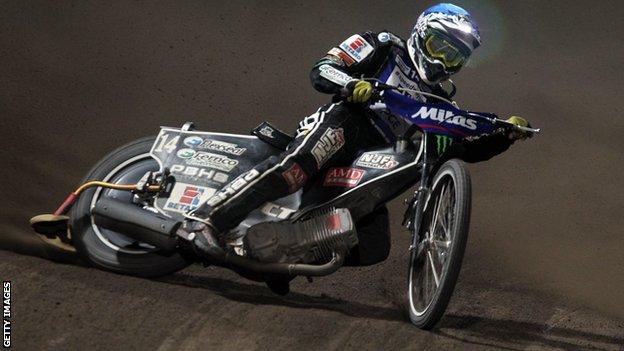 Despite breaking his collarbone for the second time in four months just two weeks ago, the 23-year-old needed only two races of the season's final Grand Prix to secure an unassailable lead.

All about Tai Woffinden

Woffinden finished on the podium five times during the 12-race season.

"What a feeling. I'm so excited. It means everything," said the Wolves man.

Loram joined Woffinden's fellow riders in saluting the new champion, who initially broke his collarbone at the British Grand Prix in Cardiff in June, as he left the track.

"It's great to have my mum here," Woffinden added. "She has given up a lot over the years to get me here, and this is amazing."

The Briton finished sixth in the season's final event, with Pole Adrian Miedzinski victorious ahead of American Greg Hancock.

Woffinden follows in the footsteps of Ole Olsen (1971 and 1975) and Sam Ermolenko (1993) as the third Wolves rider to claim the world crown.