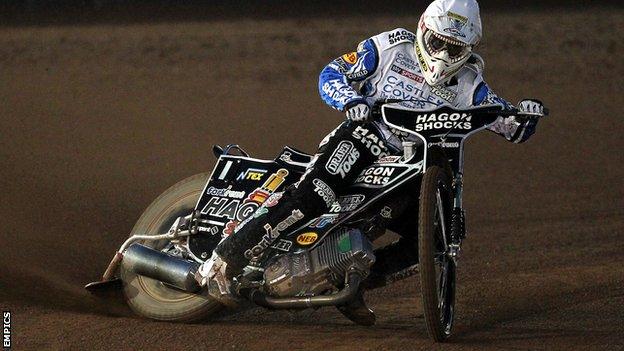 Poole Pirates boss Neil Middleditch feels his side still have every chance of making the Elite League play-offs.

Two successive wins at Eastbourne and Belle Vue have seen the Pirates climb the table from second bottom to just two points off the play-off places.

"[Play-offs are] certainly not beyond us," Middleditch told BBC Radio Solent.

"As I've said in previous years, we are the Pirates and we never give up. The last two results have shown that and we must not sit back. "

The Pirates' dismal start to the season was in stark contrast to the previous campaign, when they were beaten 95-89 over two legs by Swindon Robins in the Grand Final.

And Middleditch, whose side had only won four out of their 15 league meetings this season before their trip to Eastbourne on Friday, added: "We must keep our heads down and keep pushing forward.

"We didn't let our heads drop even though we were in a bad place. So we've picked ourselves up with the last two results."

Pirates will be hoping to continue their recent upturn in form against Monday's defeated opponent's Belle Vue on Wednesday night.

However Middleditch, who will be unable to choose the injured Tomas Jonasson for the clash, says that his side need to be wary of a backlash from the Aces' earlier defeat.

"It's not a foregone conclusion because they're going to be hurt from [Monday] night," he said. "So we've got our have our wits about us and keep going."