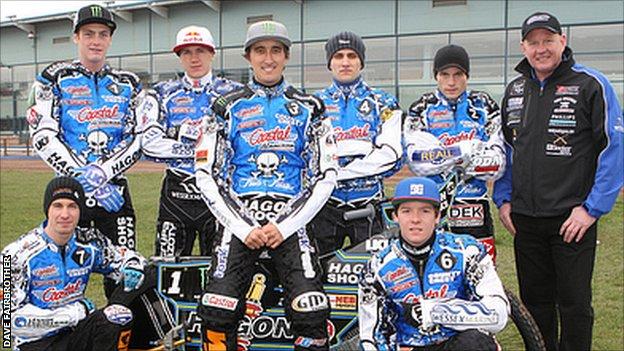 Poole Pirates captain Chris Holder believes his side can avenge their Elite League Grand Final defeat by Swindon last season and go one better this time around.

And world champion Holder is confident of success ahead of the new season.

"I think we are going to be strong and we think we've got the team to do it," he told BBC Radio Solent.

Holder and fellow Australian Darcy Ward are the only two survivors from last season's line up, but the Poole captain believes there will be less pressure on the star pair to score "all the points".

He added: "Last year we were strong all the way to the end and then got a few injuries and that hurt us.

"This year we've got a lot stronger team in depth."

The Pirates also include Polish trio Maciej Janowski (2011 world under-21 champion), David Stachyra and Robert Miskowiak in their line up.

However, they will have to do without the services of Miskowiak on Wednesday who was injured riding on Good Friday, but Ward will be in action.

And Holder says he is delighted to see his fellow Australian return to Poole for the new season, with Ward having a turbulent time on and off the track in the past 12 months.

Last year, he was cleared of sexual assault and in October was attacked outside a Dorset pub and suffered head injuries.

In December, Ward was caught fleeing police in Australia while on drink and drugs.

"He knows he has got to change a few things," said Holder.

"His riding is really good so he doesn't want to have to give it up by being silly off the track.

"I try and help him, we all do, but you can only lead a horse to water. He will be fine, he is only young. He is doing something he loves for a living so he'll work it out I'm sure."