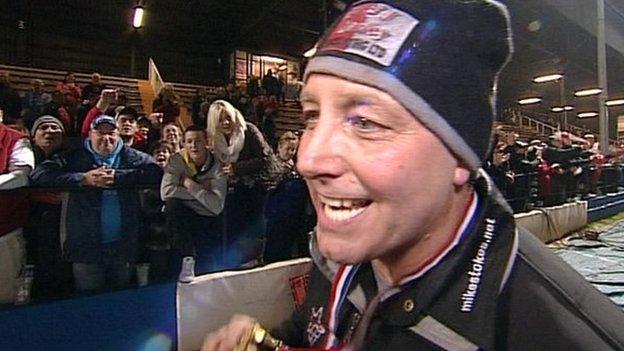 The Blunsdon outfit finished second behind Poole in the table last season, but overcame the Pirates in the play-offs to claim their first league triumph in 45 years.

The Robins start their 2013 league campaign against Lakeside on Thursday.

"I don't fear anybody with the team we've got," former Poole rider Rossiter told BBC Wiltshire.

"Trophies are like buses at Swindon - you don't see one for ages and then you see two or three. I'm sure that's going to be the way."

Rossiter is in his second spell with the Robins, having spent six years as boss before joining Coventry in 2009, where he won the title the following year.

Joining the team for the forthcoming campaign are Edward Kennett, Kacper Gomolski and Ashley Birks.

"It's about confidence and continuity," said Swindon-born Rossiter. "Everybody is familiar with each other and we've got riders who are more than capable of doing the job."

The Robins got their season off to a winning start by beating rivals Poole 98-83 on aggregate to win the Elite League Shield last Friday.

And Rossiter was impressed with the performance of new arrival Kennett, who rode for the Robins boss during his spell at Coventry, after he produced a 10+1 haul against the Pirates.

"I do know what I'm doing with riders like Edward and I know I can get a bit more out of him."