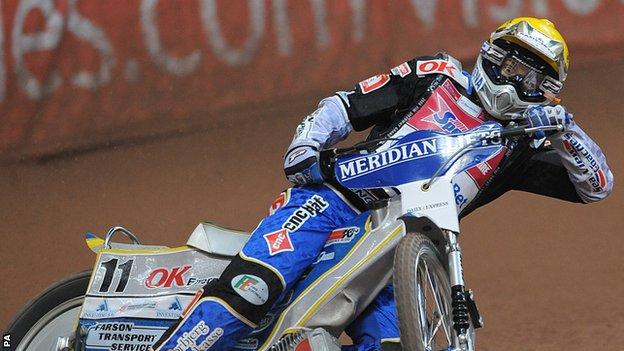 Eastbourne Eagles co-promoter Mike Bellerby is confident Bjarne Pedersen can lead the side in his second spell at Arlington Stadium.

"Last year a poor start is what cost us in the end," he told BBC Sussex.

As soon as we knew we were losing Joonas Kylmakorpi, Pedersen became the obvious choice. It's key to have a strong, reliable number one - Bjarne is that guy

"Bjarne is going to be crucial. He did the job for us in 2011 and is someone you can rely on to go out in heat one, dominate, and get you a win."

The Eagles were led-off by Joonas Kylmakorpi in 2012 but the Swede has decided not to race in the UK this season.

Pedersen, 34, has joined the club on a season-long loan from Poole Pirates, the club he has spent nine of the last 10 years with.

"Pedersen has come in and we're putting a lot of onus on him," Bellerby continued.

"It's absolutely key to have a strong, reliable number one - Bjarne is that guy.

"As soon as we knew we were losing Joonas he became the obvious choice."

Eastbourne take on Belle Vue Aces on Saturday night in the first fixture of their 2013 Elite League season.