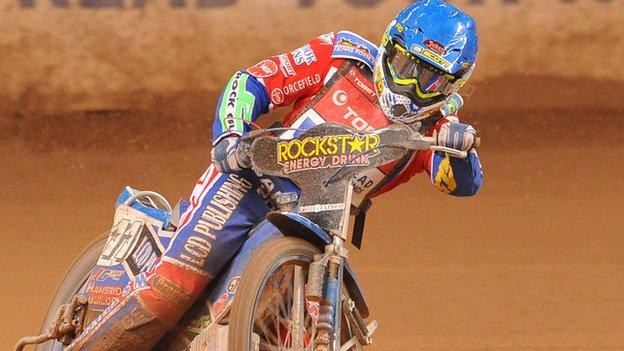 'Bomber' Harris, 31, will replace the departed Bjarne Pedersen as the new number one for the Brummies, who had to beat off three rival clubs to sign him.

"Chris is the type of rider we want," said joint-team boss Phil Morris. "The fans can be assured he will give 100% to the Brummies. He's fully committed."

"I'm very pleased to be a Birmingham rider once again in 2013," said the Brummies skipper. "It's a very well-run club with professional management. I'm looking forward to another shot at the play-offs."

Brummies co-promoter Graham Drury added: "Danny is a reliable rider who very rarely let's you down.

"He's popular with his team-mates and popular with the fans so it was the logical thing to do to bring him back for a third season."

Pedersen has moved back to his former club Eastbourne, for whom he rode in 2011, after a troubled campaign with the Brummies.

"This year was one of my worst seasons ever," he said, "I just want to get back to my best. There were five other clubs calling me but it was quite an easy decision."

Despite the loss of Chris Harris, Coventry captain Scott Nicholls has agreed terms to remain with the Bees next season, one of four confirmed Bees starters in 2013, along with Aaron Summers, Adam Roynon and Michal Szczepaniak.

The seven-times British champion enjoyed a consistent campaign in 2012, despite being hampered by a mid-season lay-off with a broken collarbone.

Coventry have made another signing for the 2013 season by agreeing a fee with the Isle of Wight for Brendan Johnson, the former British Under-18 champion.

Johnson, 20, becomes the fourth confirmed starter for Coventry's National League side as the Bees enter speedway's third tier for the first time.

His recruitment follows the signings of James Sarjeant from Sheffield, Oliver Greenwood from Scunthorpe and former Bees mascot Richard Franklin from Dudley,

Wolves have told Swedish youngster Pontus Aspgren that he is free to talk to other clubs - although he remains part of the club's long-term plans.

But they have confirmed that Jacob Thorssell will be part of Wolves' starting line-up alongside fellow Swede Freddie Lindgren next year.

He will be joined in the line-up for the 'Fast Freddie Challenge' by King's Lynn's Niels-Kristian Iversen and former Coventry man Andreas Jonsson.

Pedersen, who spent two seasons in Wolves colours. will be returning to the track where he made his Elite League debut in 1999.

Dudley Heathens have beaten off several rival clubs to sign double British Under-16 Champion Nathan Greaves for the 2013 season.

A year after winning the 250cc British title at the age of 13, Greaves, who will be 15 in February, retained his title last year, as well as claiming the 500cc crown.

"I had lots of things to consider but one of the reasons I went for Dudley was because of the Wolverhampton track," he said.

The Heathens, who will be led next season by Ashley Morris, have also signed Mildenhall captain Lewis Blackbird, who will double up with Leicester in the Premier League, And they have retained the services of Dan Greenwood, the former British Under-15 champion.

Greenwood, 19, joins 15-year-old Max Clegg and new skipper Morris as confirmed starters in the revamped Heathens side, but Darryl Ritchings will not be returning.

Clegg, who turns 16 in April, made an impressive start to his competitive career this year, averaging 4.54 for Scunthorpe after finishing runner-up in the 2011 British Youth Championship as a 14-year-old.

Stoke Potters have made two more signings ahead of the 2013 National League season - Kyle Hughes and Luke Priest.

Hughes has previously won the league title with Oxford and has also won the KO Cup with Plymouth and won the National Trophy on three occasions with Mildenhall.

Priest returns to the club after two years with Buxton, having previously won silverware at Loomer Road.

The Potters now have three places to fill in next season's squad, having signed up Ben Reade for a third successive season at Loomer Road.

Confirmation of Reade's decision to stay comes on top of Stoke making their first signing for 2013 by bringing back Lee Smart on loan from Birmingham.