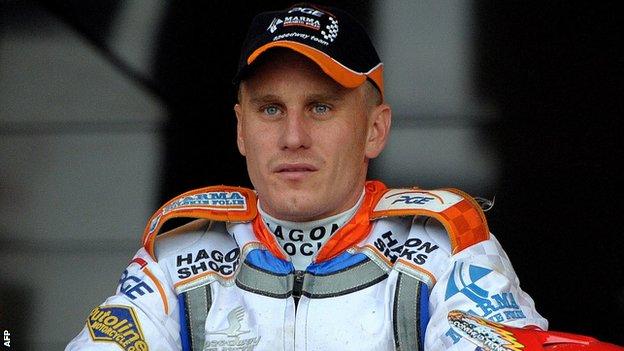 The Lakeside Hammers captain, who has represented a number of English clubs, hit the safety fence while riding for his Polish side Rzeszow in Wroclaw.

He suffered a heavy blow to the chest and later died in hospital.

Hammers co-promoter Jon Cook said: "I am numb and just can't take this in. Lee's loss to his family is beyond imagination."

Lee is a magnificent rider and our club, and the speedway family around the world, are left totally bereft by this tragedy

Hastings-born Richardson, a regular on the Grand Prix circuit between 2002 and 2006, was a former World Under-21 champion and is Britain's all-time World Cup points scorer, collecting 240 points across 10 championships.

His final appearance in the Elite League - Britain's top speedway division - was on Friday, when he contributed an impressive 10-point haul to a 59-37 win over his former club Peterborough.

"Sometimes the dangers the riders face in this sport are sidelined in the competitive spirit, but this proves just how brave speedway riders are.

"Lee is a magnificent rider and our club, and the speedway family around the world, are left totally bereft by this tragedy."

Lakeside's scheduled meeting at Coventry on Monday has been postponed.

The British Speedway Promoters' Association said it was "deeply shocked and saddened" by the news.

A statement added: "The BSPA's thoughts are with Lee's family and friends at this awful time."