World number one Judd Trump's UK Championship run came to an abrupt end in the third round with an astonishing 6-3 defeat against veteran world number 98 Nigel Bond.

But Bond, 54, used all his guile and matched it with fabulous break-building to win the next five frames, getting over the line with a fine long pink.

"Once I settled I played some good stuff out there. It's unbelievable.

"Judd missed one or two, which helped, but I was just trying to show people I can still play. When I am feeling good, my game is still there."

Bond plays either Joe Perry or his fellow Englishman Gary Wilson in the fourth round.

Hong Kong's Marco Fu could not follow up his fine win over world number nine Kyren Wilson in round two, losing a high-quality match 6-4 against Li Hang.

Trump, 30, was aiming to become just the fourth player to hold all three Triple Crown titles - the World Championship, the Masters and UK Championship - at the same time.

Stephen Hendry won all three in 1996, over two seasons, Mark Williams was the last to win all three in the same season in 2002-03 and Steve Davis is the only other player to have managed the feat.

The Bristolian had dropped just one frame on his way to the third round, but said he struggled in his 6-1 win over Mei Xiwen last time out despite scoring a century and four breaks of more than 50.

Trump claimed his maiden world title in May, having won the Masters in January.

The tour's form player has dominated the sport this season too, winning the 14th ranking title of his career at the Northern Ireland Open and lifting two other ranking titles.

But he seemed increasingly out of sorts against Bond, who has reached the last 16 of the UK Championship for the first time since 2007.

Trump said: "Anything can happen in snooker. He used his experiences and he scored heavily as well.

"I didn't do a lot wrong. It wasn't like I was getting in and missing. He made it scrappy and he took advantage. The pace of the game was very slow and hard for me to get a rhythm.

"Everyone's human. You can never get too excited or too down." 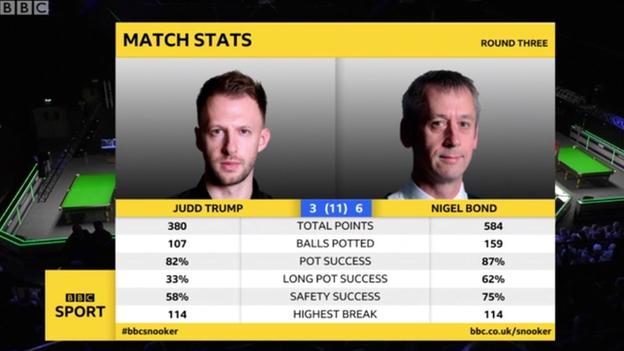 Former world number five Bond, who beat world number 31 Luca Brecel 6-5 in the first round, peaked as a player in the early to mid 1990s.

He reached the 1995 World Championship final and the semi-finals the following year, but has not competed at the Crucible since 2009 and now combines being the second oldest man on the tour with coaching.

"I enjoy the coaching and it's a good distraction, rather than battering away for hours and hours which I cannot do at 54," Bond said.