While slow play is driving golf fans to distraction, followers of another sport are watching speedier players.

Snooker is getting quicker after a crackdown on shot time, new research has revealed.

The number of players on the sport's global tour with an average shot time of more than 30 seconds has fallen from 12 to four over the past two seasons.

Thai potter Thepchaiya Un-Nooh is fastest at less than 17 seconds a shot, but Lee Walker averages twice his time.

Data was made available on snooker's live scoring website during the 2017-18 season, showing the average shot time of all 128 players on the World Snooker Tour.

The 14 slowest players all significantly improved their shot times the following season. 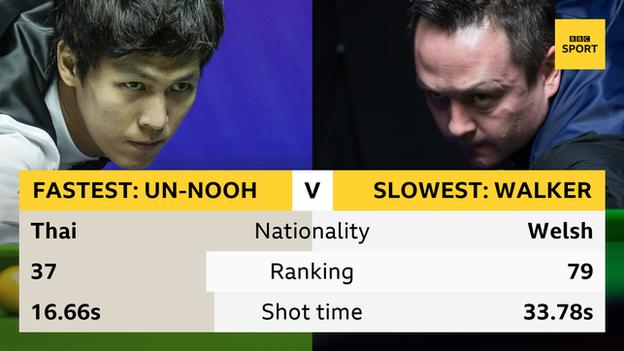 World Snooker chairman Barry Hearn said: "Two years ago we decided to make this average shot-time data publicly available, in order to make this information transparent for the players, officials and fans.

"It has had the desired effect because players don't want to be near the bottom of the list, and many of them recognise that playing more fluently actually improves their performance."

Governing body, the World Professional Billiards and Snooker Association, has published an updated version of the sport's regulations, which includes a separate rule on time-wasting for the first time.

"This helps make it clear to players that taking an abnormal amount of time over a shot will lead firstly to a warning and then to loss of the frame," said Hearn.

"These measures are helping to eliminate slow play from our sport. The vast majority of players prefer to keep the game moving, as we are in the entertainment business.

"We are pleased to see the clear message getting through to the small minority who need reminding of these principles."

Hearn said average shot times would continue to be reviewed, along with the number of times that players leave the arena in between frames.

"The frequency of these interludes must be kept to a minimum and we will be monitoring this closely in the current season."

While Un-Nooh is king of the quickfire players so far this season, he has some way to go to match the mesmerising speed of 'Rocket' Ronnie O'Sullivan.

O'Sullivan. who is yet to play on the tour this season, took just five minutes and 20 seconds for a lightning maximum 147 break in 1997- an average of 8.65 seconds a shot.