Kyren Wilson rattled off four successive half-centuries to close out an emphatic 6-2 win over Barry Hawkins in the UK Championship fourth round.

Hawkins led thanks to a slick 87, but Wilson's fearless attacking approach then dominated the world number six.

Wilson, 26, has already had his best run at the York Barbican, having not been beyond the last 32 in five previous attempts.

He felt his positive play was a big part in his win.

"It was a solid performance," Wilson said. "It was nip and tuck until the interval and I stayed positive after.

"I felt like I had to keep going for my long shots to punish Barry, because he might outplay me on a tactical battle.

"From 3-2 I had the momentum and it all followed from there. I played really strong snooker in all aspects so it is really pleasing." 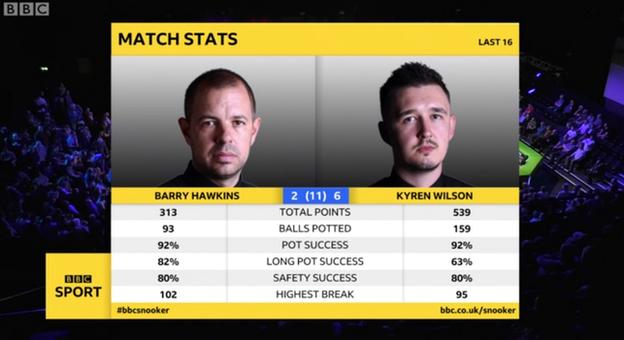 Hawkins added: "Fair play to him, he played well.

"I thought it was a good game. I missed a couple of balls and he didn't really miss when he got in.

"If he keeps playing like that he has every chance of winning the tournament."

Akani battled back after the mid-session break, but Bingham always remained in control to see out the victory.