Defending champion Mark Selby was knocked out in the first round of the World Championship after a shock 10-4 defeat by Joe Perry.

The result ended Selby's two-year hold on the trophy, having won back-to-back titles in 2016 and 2017.

A nightmare start on the first day saw the world number one fall 4-0 and 7-2 behind, and he never recovered.

Although Selby rallied with two frames, Perry, the competition's oldest player at 43, sealed a famous victory.

Perry, from Cambridgeshire, has only ever won one ranking title during his career and the furthest he has gone in this tournament is the semi-finals 10 years ago.

But the world number 22 was in inspired form, compiling a century and seven further breaks of over 50 to advance into the second round, where he faces either Masters champion Mark Allen or fellow qualifier Liam Highfield.

For Selby, it brings to an end a substandard season in which he won two ranking titles, including the previous China Open event, but failed to progress past the second round on seven occasions.

A poor first session here proved to be his undoing, missing out on becoming the first player since Stephen Hendry in the 1990s to win three or more world titles in a row and ending his 10-match winning streak at the Crucible.

'It must be horrible for him'

Mark Selby said: "The last three or four years I have had good success here so I cannot complain. To go out before the tournament has even started is disappointing.

"Performance-wise, my season has not been up to standard but then I have won two big tournaments so it is hard to say it has been a bad season. It has been inconsistent."

Asked if he is going to watch the rest of the tournament at home, Selby joked: "No. I am going to sell all my TVs and buy some new ones in three weeks' time."

Joe Perry said: "I am delighted, chuffed. When the draw came out, it is one of your two worst nightmares. I knew I had to perform at the best of my ability today and I did for the most part. A few nice bits of luck were on my side today which I capitalised on and am very pleased with my performance.

"We all know there is no-one in the game worse to have a lead on than Mark Selby. I was fully aware of that and to go 9-4 up was massive relief to me.

"I tried to keep my emotions in check because I have the utmost respect for Mark, he is the best player, the best ambassador we have and I did not want to show off. I have too much respect for him to go over the top. It must be horrible for him, I have lost here plenty of times and never been reigning champion." 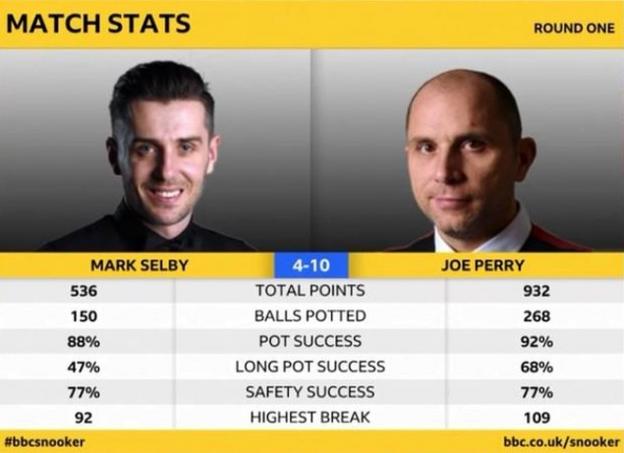 Five-time champion Ronnie O'Sullivan will hope to avoid Selby's fate, but has work to do after falling 6-3 behind against Stephen Maguire after the first session.

'The Rocket' is aiming for a record sixth ranking title of the season and 34th overall as he looks to close in on Stephen Hendry's all-time record of 36.

But, like Selby, he lost the opening four frames against his opponent, compiling a high break of just 27 and seeing his pot success rate fall to 76%.

A three-frame burst in 17 minutes after the mid-session, including back-to-back centuries, allowed world number two O'Sullivan to pull to within one, but Maguire took the next two for a three-frame advantage.

For sure the Perry-Selby result will catch the attention of the rest of the field. The qualifiers will have seen from the evidence of day one that they have more sharpness - we have seen that from the performances of Dott, Lyu and Maguire.

It will encourage the non-seeds how Perry played. When you come in, the top 16 are superior but when you see how it is now panning out, you are rethinking your goals.

If Joe Perry can beat Selby comfortably, others will think they can do the same thing. It was a great performance.