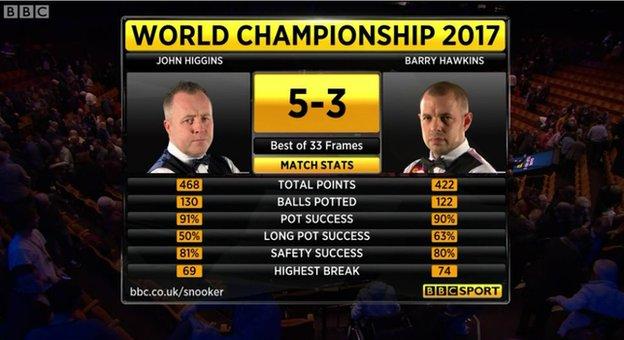 Four-time champion John Higgins has built a 5-3 lead over Barry Hawkins in their World Championship semi-final.

World number six Higgins punished a sloppy start by England's Hawkins, 38, making three breaks of 50-plus on his way to a 4-0 mid-session lead.

Hawkins, in his fourth Crucible semi-final in five years, rattled in breaks of 62 and 71 to get back to 4-2.

Scot Higgins, 41, won the seventh frame but missed a blue in the eighth and Hawkins capitalised with a 74 break.

Hawkins had said before the tie that if he didn't raise his game after an unconvincing quarter-final victory over Stephen Maguire, he would get his bum "smacked" by Higgins.

But that is exactly what happened in a miserable first mini-session.

The world number seven did not manage a break of more than 20 as he slipped 3-0 behind against the 28-time ranking event winner.

Higgins, playing in the semi-finals for the first time since his last Crucible success in 2011, missed a frame ball in the fourth and the Kent-based Londoner appeared to be poised to take full advantage only to run out of position and then miss a tricky pink while using the rest.

But Higgins was off target with several easy balls in the next two frames and Hawkins was able to cut the gap.

Higgins took a scrappy seventh frame and seemed set to lead by four overnight only to let in his grateful opponent.

Hawkins' fourth 50-plus break of the match ensured only a two-frame deficit and was greeted with a relieved puff of the cheeks as he walked off.

Barry was scrapping all through the first session and he ended up in an awkward position on things.

To lose the fourth frame was a big kick in the teeth. He had done all the hard work and the break was brilliant until he missed the pink.

But having Terry Griffiths in his corner is a huge help to Barry. He has been there and done it and knows all about the emotions you go through.

To come back from 4-0 down will be a big relief and, looking at John sitting in the chair, he looked a little bit tired around the eyes.