Ding Junhui scored five half-centuries and a ton and showed his growing matchplay maturity to lead reigning champion Mark Selby 5-3 after an intriguing start to their World Championship semi-final.

Both players demonstrated their potting prowess before the mini-break, scoring alternating fifties to share the opening four frames.

But China's Ding got the better of two of three scrappy frames to edge 4-3 ahead before taking frame eight with a brilliant 110.

The contest resumes on Friday morning, with the winner of the first-to-17 match playing either John Higgins or Barry Hawkins in the final.

Unlike last year's Crucible final, when a disastrous start saw Ding lose the opener and slump 6-0 behind against the Englishman on his way to an 18-14 defeat, the world number four settled immediately.

A beautifully measured 76, after Selby broke down in the 40s, put him ahead.

Selby's superb 68 levelled and the pair then exchanged frames, Ding regaining the lead with an 84 and the world number one rounding off a high quality mini-session with a stylish 99.

Ding had a pot success rate of 91% with the world number one marginally ahead at 92% but the first frame on the resumption was the definition of scrappy.

Two-time champion Selby, 33, won it to lead for the first time, but Ding's new found mental strength saw him outsmart Selby in a tactical 39-minute frame.

He then took control of his third last-four appearance at snooker's showpiece event with breaks of 50 and 56 to edge ahead at 4-3.

And he compiled a brilliant 110 - his 10th ton of the tournament - to take his third frame in a row and establish a two-frame lead. 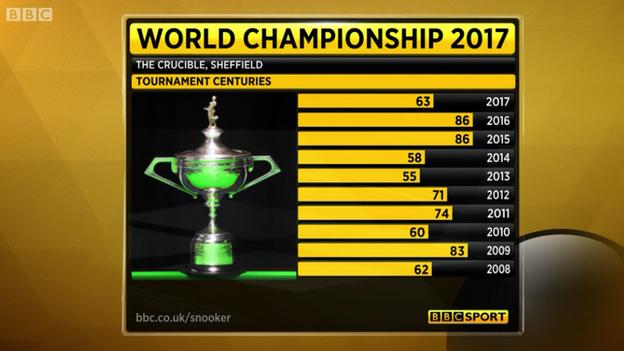 "I didn't think Ding could beat Ronnie, but he proved me wrong. Ding's weakness has been his mental strength and I said before I couldn't think of a reason why Mark Selby wouldn't win the World Championship but I can now - Ding Junhui.

"Selby played some of the best snooker I have ever seen on Wednesday. The 143 he made was the best break I have seen since working on snooker. It was unbelievable.

"Ding has to go up a level to win this match. He was great against Ronnie O'Sullivan.

"But he has to virtually not miss at all, and he started like that and needs to keep that up. It is lining up to be a classic.

"Who wins the scrappy frames could decide the match. He outplayed Mark in the safety exchange in frame six; he always had the upper hand. It is important for Ding to win those types of frames.

"We were spoilt in the first four frames but if it remains close it will get more cagey."