And he took the session's final frame to book a last-four meeting with either Ronnie O'Sullivan or Ding Junhui.

Four-time champion John Higgins wrapped up a 13-6 win over world number 14 Kyren Wilson to reach his first Crucible semi-final since 2011. 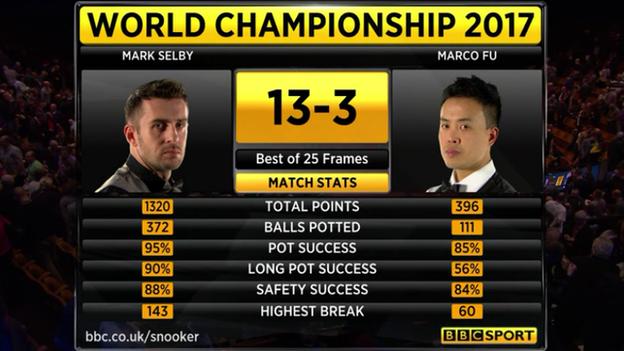 World number one Selby had said he was yet to find his form at this year's tournament, but was at his majestic best as he destroyed the Hong Kong man.

He said he played "more or less faultless snooker" in a repeat of one of last year's Crucible semi-finals.

"From start to finish there were only one or two balls I missed that I should have got," said the Leicester man.

"I was confident and focused and I think it showed. I didn't really give much of a chance. If you do finish with a session to spare it's great to have that extra rest."

Selby's five-frame burst to stretch his lead to 11-2 saw two breaks of 50-plus to go with the two tons.

But, after Fu took his only frame of the day, there was better to come, with a ridiculous clearance of 143 featuring increasingly outlandish pots as he began to lose control of the cueball in the 80s.

"It was a good break because I was never in position," he said. "I kept potting silly balls from nowhere. It was a freaky break.

Selby finished off with an effortless 65, his tenth break of more than 50 in the match.

Higgins has eyes on number five

Scotland's Higgins, 41, led Wilson 11-5 after dominating the first session from the moment 25-year-old Wilson damaged his cue tip with the scores level at 3-3.

He was at his unflappable best in building his lead and claimed two of three error-strewn frames on the resumption to seal victory.

Higgins, who will play 2013 runner-up Hawkins or Maguire in the last four, remains on course for a fifth Crucible title.

His calm demeanour and shot selection stood out on the opening day and he got over the line following a scrappy morning's play which saw Wilson continue his all-out attacking strategy.

"Kyren was desperately unlucky to split his tip at 3-3," said the world number six. "That is a big moment during the game.

"He was going for a lot and I was just trying to stay calm. He loves to go for his shots and you can't blame him. But when they are not going in it can be difficult.

"I can't wait to play in the one-table set-up. I am buzzing to get back to that. I believe I can win it again."