Ronnie O'Sullivan maintained his four-frame gap to lead 10-6 against Shaun Murphy in an intriguing second session in the World Championship last 16.

The English five-time champion established a 6-2 overnight advantage and scored two half-centuries to go 9-4 up, despite compatriot Murphy opening with a fine break of 70.

World number five Murphy responded in style after the interval with breaks of 84, 73 and 87, but he missed a simple green, allowing O'Sullivan to move to within three frames of victory.

Kyren Wilson secured his place in the quarter-finals with a 13-10 win over 2015 champion Stuart Bingham, while Ding Junhui leads Liang Wenbo 9-7 in an all-Chinese second-round meeting. 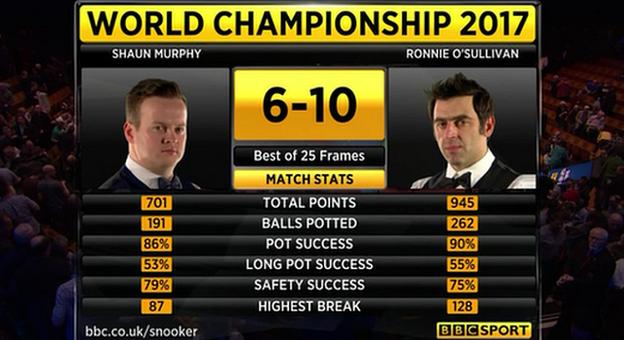 Four-time world champion Higgins did not pot a ball as Allen compiled breaks of 71, 65 and 100 to win the first two frames.

Higgins drew level but consecutive tons and an 82 put Allen 4-2 ahead before the world number six won a nervy final frame to stay in touch. The match resumes on Saturday morning.

O'Sullivan seemed intent on crushing Murphy inside two sessions for the second time at the Crucible, three years after beating him 13-3.

He added two more half-centuries to the four 50s and 128 he scored on Thursday in a blistering start, as Murphy's aim deserted him in the face of the relentless pressure.

But the Nottingham man hit back and looked like taking all four frames in the second mini-session, only to fail to make the most of a fluked yellow.

Murphy missed the green with his next shot and O'Sullivan cleared up.

The match plays to a finish on Saturday morning, with the winner facing Ding Junhui or Liang Wenbo.

Ronnie O'Sullivan seems to be on a mission. He is playing with an intention and focus I have not seen for a long time.

He is playing very fluently and there is a determination and steeliness about his whole demeanour this year.

It's a very impressive comeback by Shaun Murphy, but he will be kicking himself for not winning that final frame.