The five-time champion went 5-1 up in Saturday's first session in Sheffield, including a 122 break, but former taxi driver Wilson then won three in a row.

O'Sullivan, who later launched an attack on World Snooker, celebrated by repeatedly punching the air.

"I have a responsibility to the fans who come to support me and they want to see me do well," he said, as he spoke to the media at the length for the first time since winning the Masters in January.

"It is important I keep focused, professional, keep myself out of trouble and do a job, it is about business.

"I love to play and it is extra special at the Crucible.

"The main thing is to be in the right frame of mind, the fans have supported me for 25 years, they will continue to support me but I feel loyalty towards them and they are the most important people in my career."

Former world number one O'Sullivan won the most recent of his five world titles in 2013.

This year, he is only third favourite behind Judd Trump and defending champion Mark Selby thanks to an inconsistent season in which he has reached four major finals but claimed just one title.

His victory at the Masters for a record seventh time was the last time he won consecutive matches in a tournament - a run of five events.

At Alexandra Palace, O'Sullivan spoke about "missing too many easy balls" and the problem was evident early on in Sheffield as he struggled to clinch frames when given an opportunity.

But the world number 12 improved significantly in the second session and next faces another former champion in Shaun Murphy or Chinese 17-year-old Yan Bingtao. 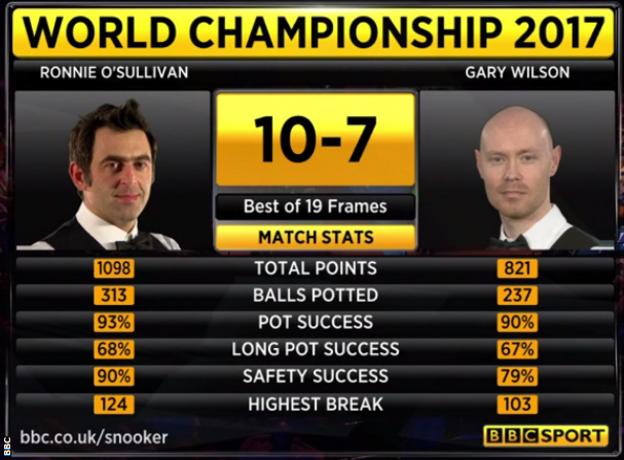 Wallsend player Wilson had shown his class in qualifying by making a maximum 147 break and seven further centuries.

The world number 59 did display his high-scoring ability with breaks of 103 and 100 and said he felt "comfortable" in his first appearance at the event.

He added: "In one way I am pleased. I did not give him it and he had to work for it.

"I felt if it got close, I had a chance of winning. It could have been closer earlier on and I was sat thinking it should be 8-8.

"You can't be too disappointed in your first time at the Crucible and I've shown what I am capable of."

Wilson - a beaten finalist in this season's Indian Open - stroked in 93 and 72 against the Yorkshireman, who performed well with breaks of 104 and 75.

And in the battle of the former champions, Peter Ebdon took the last two frames of Sunday's session - including the ninth on a re-spotted black - to trail Stuart Bingham 5-4.