Robertson, the 2013 winner, made three centuries and two fifty-plus breaks as he won six frames in a row to beat world number 15 Stephen Maguire 6-1.

In the battle of Maguire's fellow Scots, a nervy Higgins held off Jamie Burnett's comeback to progress 6-4.

Higgins, who faces Robertson in the last eight, told BBC Sport: "It was a big scare. I thought it was going to 5-5 so I was so pleased to win 6-4.

"If it goes 5-5 it's a toss of a coin. Jamie had a chance at 4-4 but missed a red and he will be kicking himself because I was really struggling.

Higgins, winner of 28 ranking events including two this season, started impressively enough with three breaks of more than 50 earning a 3-0 lead.

But at 4-1 ahead, he missed numerous simple pots and Burnett grew in confidence.

Higgins settled his nerves with a brilliant 102 to go ahead and settled the match with a break of 71 - his fifth half-century.

Robertson had no such trouble in his win over Maguire.

A superb ton earned the Scot the opening frame, but he barely had a look-in after that.

"He was awesome. If he plays like that then he wins the tournament," Maguire told BBC Sport.

"That was a lesson. If I go back in time I couldn't really doing anything about it. But he can't keep that up, it's impossible. He was potting everything."

Maguire's opening-frame 118 was followed by breaks of 124, 76 and 101 by Cambridge-based Australian Robertson as he established a 3-1 interval lead.

The Scot, UK champion in 2004, was then incredibly unfortunate to go in off when on course to win the fifth frame. 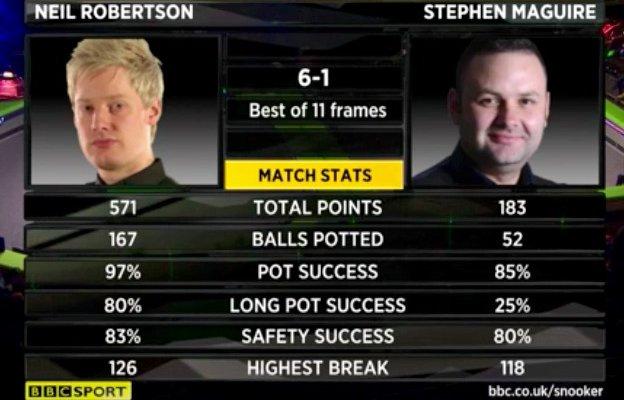 Robertson took full advantage, winning that crucial frame and closing out victory with a break of 113.

Robertson, who had 97% pot success, said: "That was the best I have played all season, without a doubt. I played great but I knew I had to.

"I have to maintain my focus and keep my foot down.

"He looked in really good nick in that first frame and didn't really have a chance up until 3-1 when he was unfortunate to go in off the yellow.

"That was the only obvious mistake he made - even though it was very unlucky."

And Londoner Martin Gould was a comfortable winner over Northern Ireland's Joe Swail, earning a 6-3 victory to complete the quarter-final line-up.