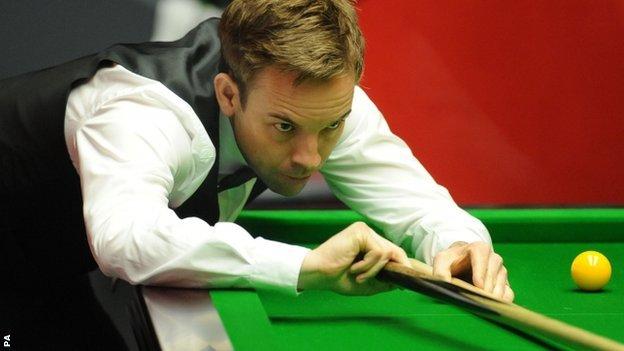 Two-time World Snooker Championship runner-up Ali Carter has been diagnosed with a form of lung cancer.

World Snooker announced on Saturday that the 34-year-old from Chelmsford will undergo an intensive course of chemotherapy.

The world number 13, who has Crohn's disease, last year recovered from testicular cancer to resume his career.

He was beaten by eventual champion Mark Selby in the second round of this year's World Championship.

Selby said on Twitter: "Gutted to hear the news. My thoughts go out to him and his family at this tough time."

He added: "Having spoken to him over the last few days, I can assure everyone he has the fight to get through the battle ahead."

Former world champions Shaun Murphy and Neil Robertson were among those to offer their support.

Shaun Murphy, who won at the Crucible in 2005, said he was "devastated" while 2010 world champion Robertson tweeted: "Shocking news about Ali Carter. Thoughts are with him and his family. Hopefully can make full recovery."

Six-time World Championship runner-up Jimmy White, who recovered after being diagnosed with testicular cancer in 1995, said: "Absolutely gutted for Ali, praying for you mate."

Carter had been due to play on Saturday in Gloucester, in the qualifying stages of the Wuxi Classic, but pulled out.

He is a three-time ranking tournament winner, having landed titles at the 2009 Welsh Open, 2010 Shanghai Masters and 2013 German Masters, but lost to Ronnie O'Sullivan in the 2008 and 2012 Crucible finals.