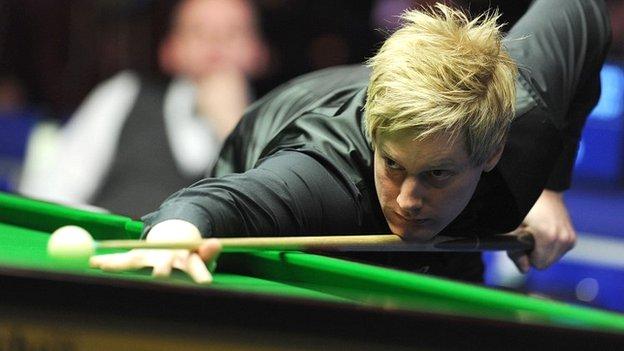 World number one Neil Robertson fended off a brilliant late fightback from Stuart Bingham to reach the final of the UK Championship for the first time.

Australian Robertson, 31, had the better of the opening session, taking a 5-3 lead into the interval in York.

He then rattled off the next three to move to within a frame of victory, before a Bingham revival saw the Englishman take five successive frames.

But Robertson held his nerve to win the decider and claim a thrilling 9-8 win.

It was a brave performance from Bingham, who had led from the front in his quarter-final victory over world champion Ronnie O'Sullivan.

But in the semi-final, the 37-year-old was kept off the table as Robertson blitzed into a 5-2 advantage in the best-of-17 frame match.

Bingham was 2-1 up after breaks of 72 and 124, and made 51 in frame four before Robertson stole it and built a lead, taking the three frames after the interval, helped by breaks of 86 and 68 to add to an earlier 70.

Bingham cut the arrears to 5-3 with a 78 in the last frame of the session but Robertson took the first three of the evening, the last with a break of 81.

However, Bingham edged the next two before winning the 16th frame with a century break to force a decider.

Both players had opportunities early on, but it was Robertson who capitalised first to snatch victory and set up a final against defending champion Mark Selby or Ricky Walden, who play their last-four encounter on Saturday.

Robertson, who won the 2010 World Championship and last year's Masters, is seeking to become only the eighth player to win all three of the major titles, dubbed snooker's Triple Crown.

Steve Davis, Terry Griffiths, Alex Higgins, Stephen Hendry, John Higgins, Mark Williams and O'Sullivan are the only players to have achieved the feat.

Hendry, Davis and Williams have won all three events in the same season, with Hendry the only man to do so twice.

"To join that group of players would be amazing," left-hander Robertson said.

"I've improved with every performance as the tournament's gone on. I've still got a few gears to come so hopefully my best snooker's to come in the final."

Bingham said: "I was just trying to make the score respectable and then all of a sudden I had a chance to win. I'm just gutted, lost for words."