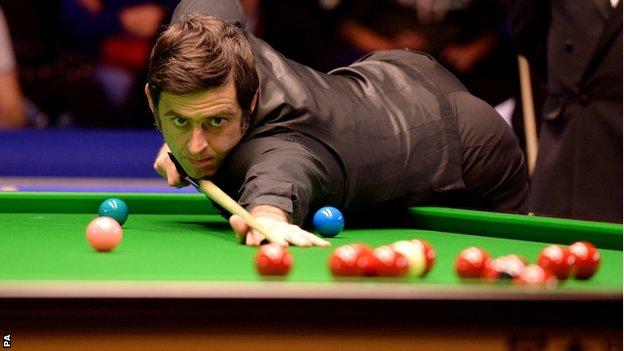 World champion Ronnie O'Sullivan and in-form Ding Junhui made swift progress through to the fourth round of the UK Championship in York.

Australia's Neil Robertson, the world number one, defeated Li Hang of China 6-3 to join them in the last 16.

Stephen Maguire became the first man to reach the quarter-finals with a 6-3 win over fellow Scot John Higgins.

"It's a great win," said Maguire, who made a tournament-high 142 in the sixth frame. "Any time you beat John Higgins is a proud moment.

"I felt good after the interval. I should probably have been 3-1 up, maybe even 4-0, and at two each I was thinking 'have I given it away?'

"But I was happy with how I knuckled down after the interval."

Maguire will be joined in the last eight by Barry Hawkins after the Englishman edged out compatriot Shaun Murphy 6-5.

Elsewhere, Sheffield amateur Mitchell Travis saw his surprise run come to an end in round three with a 6-1 defeat by David Morris.

"I'm disappointed but overjoyed with my performances all week," said Mitchell, who beat sixth seed Marco Fu in round one.

"It's nice to get in some games against the big lads and put my name out there. This week I've been all over the papers.

"It's nice to see, hopefully I can keep it going now."

"I didn't really perform great but I finished the match off well," said Selby.

"Playing Graeme tomorrow, I can't get off to a start like that. I've played him quite a few times and we've always had close games and gruelling matches, I'm sure tomorrow will be no different."

O'Sullivan made two century breaks in an otherwise uneven match, and told BBC Sport: "Marcus is a tough player, a hard match player.

"My confidence should be high - world champion and I've just won the Champions Cup - but it doesn't seem to matter sometimes."

Asked about his current level of motivation and how long he envisages playing before taking another break from the game, O'Sullivan added: "Until I get bored again, but I'm enjoying it at the moment because we've played a few tournaments on the bounce.

"But maybe I need a little bit of time off after this. You've just got to try and work the system to your advantage. It can be a grind."

Ding is trying to become the first player since Stephen Hendry in 1990 to win four ranking titles consecutively, and the Chinese star said: "That's the legend. No-one has done that since he did it so I'll try."