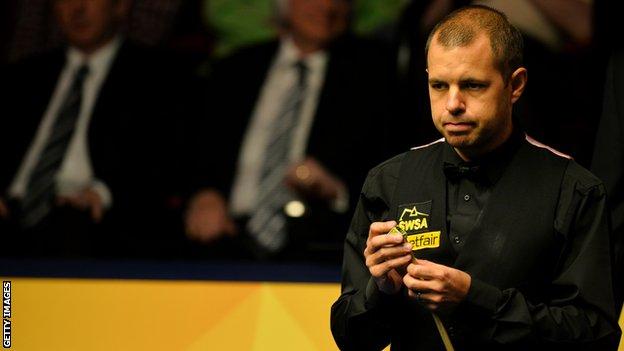 Barry Hawkins admits he has struggled to get motivated following his run to last season's World Championship final.

The world number eight cruised into the second round of the UK Championship by beating Switzerland's Alexander Ursenbacher 6-0 on Thursday.

The 34-year-old said: "Hopefully I can have a decent run here. I haven't really done much since the Worlds."

The 21-year-old from Sheffield is one of seven amateurs handed an entry into the first round, and defeated Fu, who has won the Australian Open and reached the final of the International Championship this season.

"I haven't got words for that yet, it's the biggest win of my life. Before the match I knew I had nothing to lose," Travis said afterwards.

John Higgins, a three-time winner, made it safely through to the next round, beating Malta's Alex Borg 6-2, Stephen Maguire defeated Leeds man Sanderson Lam by the same scoreline, while Joe Perry won 6-3 against James Cahill, the nephew of seven-time world champion Stephen Hendry.

I have not had a great season. I haven't really done as well as I would have liked, so I have put some more hours in and hopefully things will kick-start from here

Those three move into round two along with Kent-based Hawkins, who has been disappointed with his form since losing last season's World Championship final in Sheffield to Ronnie O'Sullivan.

Hawkin added: "It sounds a bit funny, but I found it hard to get motivated at home. To be honest, I think I lost a bit of interest since then.

"I have not had a great season. I haven't really done as well as I would have liked, so I have put some more hours in and hopefully things will kick-start from here."

The London-born player reached the semi-final of the first European Tour event of the season in Bulgaria, but his only notable run in a ranking tournament came at the Shanghai Masters in China in September, where he lost to eventual winner Ding Junhui in the last four.

However, having secured his place in the final 64 of the new-look UK Championship at York's Barbican Centre, Hawkins hopes to put things right.

"I had everything to lose I suppose - as a top seed - so it is nice to get the first round out of the way," he said.

"If you get through the first few rounds you warm up. You are playing all the time and your confidence gets gradually higher.

"If I can get through the first two or three rounds, then once you are in the thick of it anything can happen and you can hit a bit of form."

Hawkins, who lives in Ditton, said he can still hopes to tap into the experience he gained from his efforts at the Crucible in May.

"It obviously helps although it seems a long time ago," he added.

"It gives me belief deep down, but I am just trying to put the work in and hopefully I can go quite far here."

Full results from the UK Championship