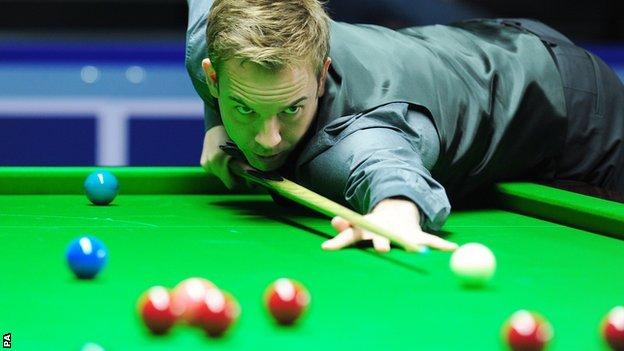 Former world number two Ali Carter complained about the new format and cramped conditions after reaching the second round of the UK Championship.

The 34-year-old Englishman, who had surgery for testicular cancer in June, beat Thailand's Ratchayothin Yotharuck 6-1 to secure his place in the last 64.

But he said a first round with 128 players competing was not working.

"It's not for me this flat draw. I don't think the venue can accommodate it," said Carter.

Carter said he felt the top players had earned the right to avoid having to play a match just to make the final 64.

"It's hard to believe that if you are in the top 16 you would be in favour of this," he added.

"We all had to come through the old system. We all started off at the bottom and got to the top so I don't see why doesn't everyone else have to do that."

Carter, who has Crohn's disease and was given the all-clear by doctors in July after surgery for cancer, has had a quiet season. The semi-final of a European Tour event is the furthest he has progressed, but he feels he can do well in York.

"I am playing all right. I am not doing anything spectacular yet but I have had a tough year and a lot to deal with. I am just glad to be back playing and competing," he said.

"I think I showed a bit of form last week. I can take a bit of confidence from that and hopefully have a good run this week.

"The reward of qualifying for an event like this is being in the big arena under the lights and in front of the cameras and that doesn't seem to be happening anymore."

Former world number one Judd Trump, who beat amateur Gareth Green 6-2, was another to criticise the format, and said of the multi-table arrangement: "It feels like a circus, there is so much going on out there, you are watching other tables and you can't concentrate without the barriers.

"All I could think of was making a 147. No disrespect, he made a couple of good breaks, but to be playing in the UK Championship with four tables is poor."

However, Jason Ferguson, chairman of the World Professional Billiards and Snooker Association, told BBC Sport: "With any change, there are always winners and losers.

"We have a responsibility to provide a level playing field and ensure everyone has a fair opportunity.

"It's a chance for talented younger players to make a name for themselves. We've already seen the likes of John Astley, Chris Wakelin, Vinnie Calabrese and Gary Wilson beat higher ranked opponents and get the chance to tell their story."

Six-time World Championship finalist White, who is having physiotherapy and acupuncture after having surgery to lengthen the tendons in his foot in the summer, beat Michael Wasley 6-4.

White said: "I am very pleased to win, but it wasn't a great game and there were a lot of balls missed.

"In the balls, I felt OK but my safety play was non-existent. Luckily enough I got through. I am struggling to stay on the tour so it was an important win."

World Championship finalist Hawkins eased to a 6-0 success against Switzerland's Alexander Ursenbache and Northern Ireland's Allen was also an easy winner as he completed a 6-1 triumph over Jak Jones.

Shaun Murphy, the 2008 UK champion, received a walkover into the second round after the withdrawal of opponent Lee Spick before the match.

Results from the UK Championship in full