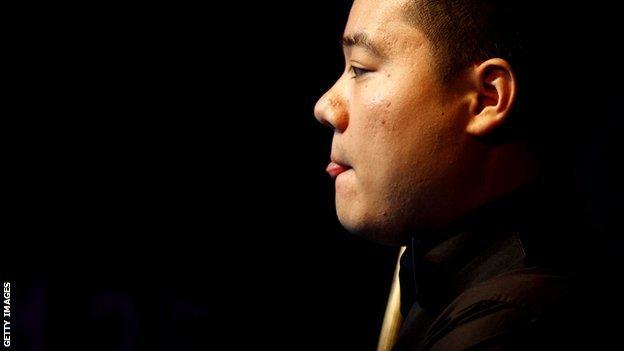 It's Christmas Day. You're 16 years old and stuck on your own in a small bedroom in a small flat in a small provincial town halfway across the globe. No phone, just five channels on your telly spouting gibberish.

Now imagine your family gathered back home. Tearing into presents, pulling crackers, carving up the turkey while you're weeping into a Pot Noodle.

This, pretty much, is what Ding Junhui had to go through, albeit in reverse. The kid must have been tough as old boots.

This is what Ding had to go through to prove that maybe - only maybe - he was among the best on the planet at a game involving a felt-covered table, a bunch of different coloured balls and a stick called a cue. And there you were thinking your life was odd.

"I first came to England from China in 2003," says Ding, who recently became the first man since Stephen Hendry in 1993 to win three ranking events in a row and beat Middlesbrough's Antony Parsons 6-3 in the first round of the UK Championship on Saturday.

"I lived with two Chinese snooker players for a week before they left. Then it was just me and some Thai players. I was scared. Nobody came with me. I was so far away from home and I didn't speak English. I couldn't even watch TV.

"But Chinese New Year was when I'd really miss home.

"My parents sold their house when I was 12 and we moved to the other end of China," says Ding, who first picked up a cue only three years earlier. "We moved to the south, where I could learn snooker properly. They didn't tell me at the time because parents worry, so I didn't feel the pressure."

Ding practised eight hours a day, day after day after day, and was soon making great strides on the Asian circuit. Then, in 2003, Ding packed up his cue and set out on his curious odyssey. Zai jian Shanghai, hello Wellingborough.

"I like that little place," says Ding of the small market town in Northamptonshire. "The people were very good to me. But what I remember most about Wellingborough was the fish and chips. They had the best fish and chips, especially with mushy peas.

"But I didn't talk a lot. I just played. That was all. My father had done so much for me I needed to earn money to keep everything going."

In 2004 Ding received an invitation to the prestigious Masters tournament, where the 16-year-old lost 6-5 to Stephen Lee in the second round. But Ding showed enough to have wise heads tipping him as a future world champion. And so the tap turned and the drip-drip of pressure became a steady trickle.

Ding remained dry and continued to thrive. In 2005 he celebrated his 18th birthday by beating seven-time world champion Hendry in the final of the China Open. An estimated 110 million of his countrymen and women watched the game on television - more than twice the population of England.

That same year, Ding beat Steve Davis in the final of the UK Championship, becoming the first player from outside the UK and Ireland to win it.

And when Ding dispatched Ronnie O'Sullivan in the final of the 2006 Northern Ireland Trophy, he became only the third player - after O'Sullivan and John Higgins - to win three ranking titles before his 20th birthday.

Next stop greatness? If only sport were that simple.

"At the start I felt fresh," says Ding, who boasts three million followers on Weibo, China's equivalent of Twitter. "But year after year the pressure got bigger. Especially in China. They don't just want you to win, they think you will win."

As his form waxed and waned, the media back home started asking the inevitable question: "What's gone wrong with wonder kid Ding?" When he reached the final of the Masters in 2007, O'Sullivan walloped him 10-3. Ding - scared, far away from home - was in tears before the end came.

Ding continued to rattle in big breaks and win major tournaments - the UK again in 2009, the Masters in 2011 - but the questions over his temperament remained.

Over four years from 2007 to 2010, Ding failed to make it past the second round of the World Championship in Sheffield. He reached the semi-finals in 2011 but lost the last three frames against Judd Trump to go out 17-15.

"The Crucible has caused me a lot of pressure, the biggest pressure ever," says Ding, now based at the Star Snooker Academy in Sheffield, with its large Chinese student community and its authentic Chinese food on West Street.

"This year I felt rushed against Barry Hawkins [who beat him in the quarter-finals] - my concentration wasn't right. I don't remember anything about that game.

With O'Sullivan playing only sporadically around his Crucible heroics over the past two years, snooker could do with a commanding presence.

No man is likely to dominate snooker in its cluttered modern form but every sport is better off with a pre-eminent figure, someone the rest of the field can aim at and whom the public want to see dazzle or shot down.

Ding's recent triple suggests he can become that man. That two of his title victories - the Shanghai Masters and the International Championship - were achieved in China further suggests he has learned to remain dry even when that trickle of expectation becomes a torrent.

And should Ding win even one world title, snooker supporters in this country should celebrate his triumph as one of their own. For while his blood is 100% Chinese, Ding's heart beats English.

"English people are very gentle, very polite. In England, I obey the rules very carefully. In China, nobody seems to care. Everyone wants to go first - quick, quick, quick. I feel like I have to be like that as well and it makes me unhappy."

Let's hope all this time in England hasn't softened the old boot up too much, because Ding is dreaming on behalf of many millions. But, as with most of us, it's the folks he wants to please most.

"Before I turned pro, my father would tell everyone how good I was going to be," says Ding. "And my mum likes to tell everyone: 'This is my son.' They'd love to see me win a world title. That's their biggest dream."