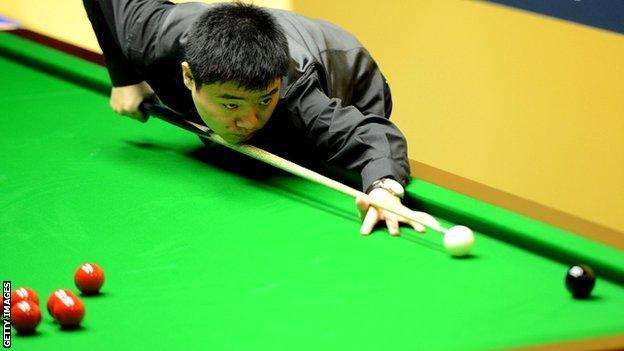 Ding Junhui will take on Xiao Guodong in the first ever world ranking final between two Chinese players at the Shanghai Masters on Sunday.

Ding, the world number 12, followed up Friday's victory against world number one Neil Robertson with a 6-2 win over England's Barry Hawkins.

The 26-year-old is looking to win the seventh ranking event of his career.

Xiao earlier beat Englishman Michael Holt 6-3 as both men made their first appearances in a ranking semi-final.

Ding took the first two frames against Hawkins and, although the Kent left-hander easily claimed the third, 2-1 soon became 4-1.

A break of 90 was enough to give Hawkins frame six and pull it back to 4-2, but any respite was brief, with Ding taking the next two comfortably.

"I'm happy to be in the final as it's not often I play to such a good level at tournaments held in China," Ding told World Snooker.

"Xiao is in top form and nobody knows what's going to happen tomorrow. Everyone knows that he will clear up and win frames when he's given chances and his safety has been great as well.

"He's been playing against tough players and won all his four matches. Not every time a higher ranked player wins, and the trophy doesn't always go to a top eight player."

It was the home player who dominated from 3-3, however, the 24-year-old rattling in a break of 111 and securing victory with a superb 127.

"I'm confident now and I'm going to lift the trophy tomorrow, whoever I'm going to play," said Xiao, who is based in Gloucester and coached by Terry Griffiths.

"This is what I've been desperate to do for years. It's not done if I lose. I have one more match to play, which will be my biggest stage in my career."

Holt turned professional in 1996, and the 35-year-old said: "I've got to take the positives out of this week but I'm disappointed because I thought I could have won it. I have proved that I can play out there."