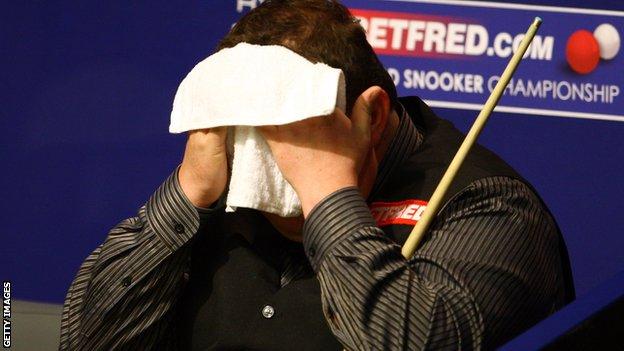 He was one of the world's top snooker players but Stephen Lee's career is in tatters.

The 38-year old faces a lifetime ban after he relating to seven games, including one at the World Championship.

For a period last year, the five-time tour title winner was one of the best potters on the planet, reclaiming his place in the top 10 as his smooth cue action helped rack up a string of impressive results.

But behind the scenes his world was unravelling, with a web of deceit finally exposed at a tribunal which heard he teamed up with his then manager, sponsor and a friend so they could profit from his cheating.

Lee, of Trowbridge, Wiltshire, was found guilty of deliberately throwing two matches at the 2008 Malta Cup and the opening frame of two games he went on to win at the UK Championship that year.

He agreed to lose by a particular score in another Malta Cup encounter, and pulled off the same trick in a match at both the 2009 China Open and World Championship.

If the offences had been committed more recently, he would have been given a mandatory life ban under a tougher disciplinary regime introduced after Barry Hearn took over as boss of the World Professional Billiards and Snooker Association (WPBSA).

Because his case has been heard under the rules as they stood when the matches took place, a lifetime suspension is not guaranteed, although the option will be available when his sentence is considered on 24 September.

Hearn maintains there is no place for cheats in the game, and - headed by former detective chief superintendent Nigel Mawer, an expert in tackling sport match-fixing.

They are aware that any event with only two outcomes (a winner and loser) is potentially open to those who want to profit from wrongdoing via inside information.

Every match is monitored for unusual betting patterns on a range of markets, from frame winners to correct scores, with alarm bells sounded by punters placing unusually large wagers or a big-staking new account holder focused on one particular player.

"Match fixing is a growing concern, indeed a cancer in many sports, and must be eradicated," said Adam Lewis QC, chairman of the independent tribunal which heard the Lee case over three days in Bristol.

World champion Ronnie O'Sullivan's claim after the verdict echoes comments that have floated around snooker for years.

If a player is willing to deliberately lose a frame or match, he can do so - veiling the act under a cloak of excuses, which could range from a mis-hit shot, pressure, nerves or being out of form.

Lee's downfall shows this remains possible, whatever the safeguards, but also that those who cheat risk their careers.

While online gambling, and the ability to 'lay' or back against a particular outcome, has opened up the scope for more fixing, the trail of evidence from betting accounts, computers and phone calls can expose the cheat.

Whereas criminal cases, with the evidential 'beyond reasonable doubt' standard, are harder to prove, sport governing bodies can successfully bring cases within their own rules using the civil standard of proof - 'the balance of probabilities'.

This is what did for Lee. He had been arrested by West Midlands Police in 2010 over the allegations, but the Crown Prosecution Service decided to drop the charges in October 2012.

When fresh suspicions surrounded a Premier League game against John Higgins, which Lee lost 4-2 and was not pursued to a hearing,

The tribunal report into the Lee case said bets were placed by three groups of people, including his then sponsor Paul Jones - an independent financial adviser trading as Prosperity from Stourbridge in the West Midlands - who opened multiple betting accounts with various associates.

The second group were found to have been co-ordinated by his then manager Neil Clague, based on the Isle of Man, who placed almost identical bets. And the third was a friend called Ian MacDougall, from his hometown of Trowbridge.

They bet in unusually high amounts, on the internet and with high street bookmakers.

"Lee was in contact with the groups in the lead-up to the matches in question and afterwards," said a WPBSA statement.

"In one case the person collected the successful bet and placed half of the winnings into Lee's wife's bank account.

"The total amount bet on these matches was in excess of £111,000 leading to winnings of over £97,000 for the persons placing the bets. It is not clear how much Lee benefited from their activity."

Lee will have the chance to put forward mitigation, and can cite the fact he has been suspended for a year already and the allegations have hung over him since early 2010.

He has been in trouble before - testing positive for cannabis in 2001 after a routine drugs test at the Champions Cup in Brighton - although his father insisted it was the result of him being in a room with someone smoking the drug.

However, these fresh findings bring far more serious consequences and come just after a time when his career was on the up again.

"It's a cracking feeling. It makes all the hard work and travelling worthwhile," said Lee at the time.

Joe Jogia: Suspended for two years in 2012 after a probe into suspicious betting patterns

John Higgins: Found guilty of 'giving the impression' he would breach betting rules, and of failing to report the approach in 2010. Banned for six months.

Quinten Hann: Banned for eight years in 2004 after being found guilty of breaking rules by agreeing to lose a match in exchange for money.

Peter Francisco: Found guilty of bringing the game into disrepute in 1995 and given a five-year suspension.

But despite making well over £2m from tournaments during his career, he was in financial trouble. The father-of-four, who married his long-time partner Laura in Florida in 2005, faced county court judgements for unpaid bills.

His camp protested innocence throughout and claimed the suspension effectively made him guilty before any evidence had been fully examined.

"He has worked incredibly hard. He is sick of all this stuff getting thrown at him and feels there are doubts about him every time he misses a ball," said his most recent manager Adam Quigley around the time of his suspension.

Supporters bemoaned the length of time it took to bring the case, but the process was not helped by the player changing his lawyer three times.

Quite why he was in financial turmoil, or exactly what motivated his money-making misdemeanours, has not been made clear. When asked for his side of the story, he wanted to be paid for it.

During his suspension, which applies to tournaments sanctioned by World Snooker, he has still been playing the game for money at other events and exhibition matches.

In May, Lee - who will be 39 next month, a year to the day from his suspension - won the RKG Masters pro-am tournament in India, with his run including a 7-1 defeat of Michael Holt in the semi-finals.

But after 21 years as a professional, the chance of him adding to his tour titles now looks remote.