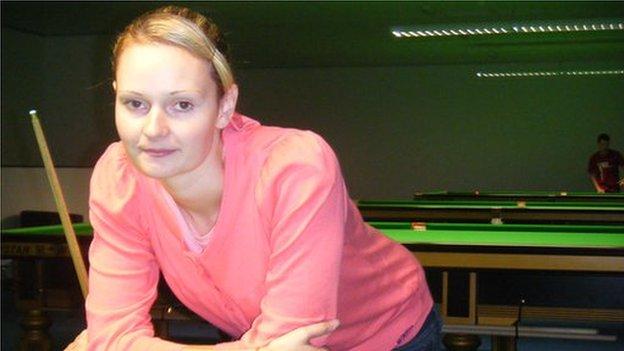 Evans, 27, qualified for the event in China but was then required to play an extra wildcard match for the right to face Neil Robertson in the first round.

Reanne Evans became the first female qualifier for the main stages of a ranking event after beating Thailand's Thepchaiyah Un-Nooh in the qualifying tournament in May.

Evans was handed a wildcard to the World Snooker Tour in 2010-11, becoming the first woman to compete on the main circuit for 15 years, but failed to win a match throughout the season.

She tweeted: "Well what a load of plop. Oh well, good experience. Onwards and upwards. Just the beginning."

The tournament is the first in which the top 16 players had to qualify.

Evans lost the first frame despite opening with a break of 35, but finally got on the scoreboard by winning the fourth frame with the highest break of the match, 79.

The Dudley player won the fifth frame as well to reduce the Chinese wildcard's lead to one, but Zhu took the next two frames to close out the match.

"It took me a while to get into the match because of my lack of experience in these conditions," Evans told worldsnooker.com.

"I just need more matches in these conditions - that can only sharpen and improve my game. The more comfortable you are, the better you are going to play.

Jimmy White, 51, beat defending champion Ricky Walden 5-2 in the first round to reach the last 32.

All 128 tour players started in the same qualifying round of the tournament as part of a new format.

Mark Selby and Shaun Murphy were eliminated in qualifying, while world champion Ronnie O'Sullivan pulled out because of "personal reasons".