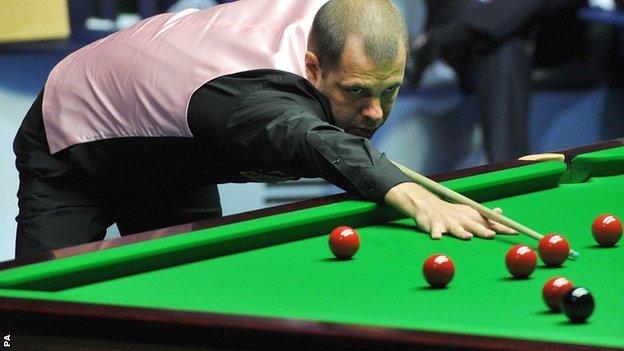 Barry Hawkins recovered to beat Ricky Walden 17-14 in his World Championship semi-final and set up a final against Ronnie O'Sullivan at the Crucible.

Hawkins, the world number 14, was 12-8 down at one stage but won nine of the last 11 frames, including a run of eight in a row, to prevail.

Before this year, the Englishman had never gone beyond the second round.

And he will be a huge underdog against defending champion O'Sullivan, who has not been beaten in four finals.

O'Sullivan leads Hawkins 4-1 in head-to-heads and if Hawkins does manage to cause an upset it would rank alongside Joe Johnson's 1986 world final win over Steve Davis in his prime as the biggest in the tournament's history.

"I can't believe it - I am in bits," said Hawkins, who won this season's Australian Open and was also a semi-finalist at the German Masters.

"The way I started off in this match, I lost my way completely. My cueing went and I just did not settle. I kept digging deep and I kept fighting. Things started turning around and I found my game.

"I've got nothing to lose now. I'm just going to go out and enjoy it and see what happens."

Beaten semi-finalist Walden added: "Barry started to play better towards the end of the match. He deserved to win in the end.

"I'll look back and take the positives but just now it's a bit sore.

"If Barry gets off to a good start in the final he can definitely keep Ronnie at bay."

Walden, the world number 13, led his compatriot 6-2 after the first session, when Hawkins was so out of sorts he received an ironic cheer on passing 40 for the first time.

But having gone 12-8 down in the second session, the 34-year-old from Kent proceeded to turn the match on its head.

"What chance does [O'Sullivan's opponent] have? None. I'm frightened the final will be a procession.

"I've had a good hiding from him before, and once he gets in front it's almost impossible to peg him back. He hasn't been behind in any match in this tournament and I can't see that changing."

The left-hander cut the gap to three courtesy of a break of 104 before nicking a gruelling 56-minute frame to make it 12-10.

Hawkins, who has been working with former world champion and mental guru Terry Griffiths, also ground out the next before making a break of 66 to draw level heading into the final session.

He then won the first frame of the evening session on a re-spotted black, added the next despite a break of 56 from Chester's Walden, and a 60 in the 28th frame left him one frame from the final, before Walden found some form to win the next two racks and reduce the deficit to two frames.

But at 16-14, Walden was in the balls when a terrible piece of luck saw him knock in a red having potted the blue, allowing Hawkins to finish off the match.