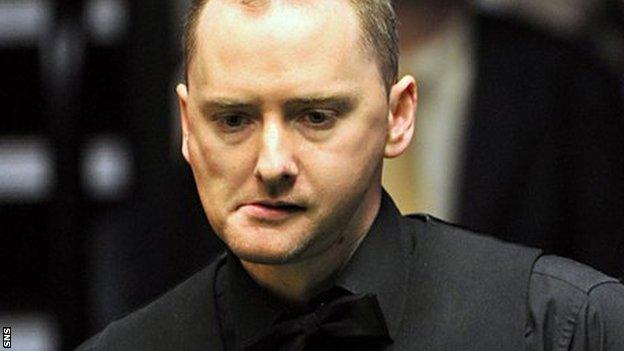 Graeme Dott's defeat at the World Snooker Championship means there will be no Scottish players in the last eight for the first time in 25 years.

The 2006 champion was the only one of five Scots to make it to the second round but was beaten 13-11 by Shaun Murphy.

"I've changed a few things for this tournament and it was clearly working," reflected Dott after his last-16 exit.

"I was cueing OK and certainly better than I had been doing all year."

Marcus Campbell lost to Ronnie O'Sullivan in the first round, while John Higgins and Stephen Maguire exited at the hands of Mark Davis and Dechawat Poomjaeng respectively.

Alan McManus was beaten by Ding Junhui and Dott's departure means that, for the first time since 1988, Scotland's interest has ended before the quarter-finals.

Dott fought back from a 6-2 overnight deficit to win six of the eight frames in the session to level the match at 8-8.

But with the match level at 10-10, Murphy gained a crucial lead on a re-spotted black before going on to seal victory.

"You know you're doing OK if you're pushing Shaun all the way because he's a class act," said Dott.

"But that's the way it goes. Shaun played well and he was stronger than me, cued better and probably deserved to win."

Stephen Hendry has more World Championship wins than any other player with seven, and reached the semi-finals 12 times between 1990 and 2006.