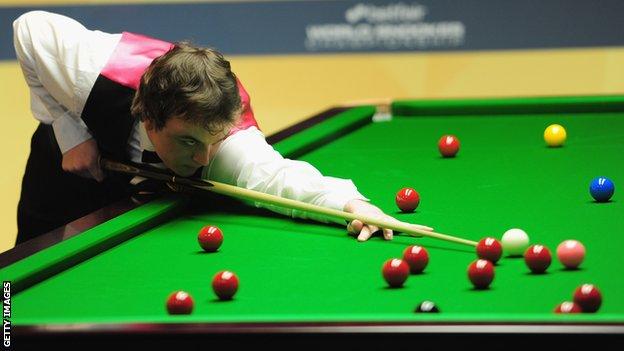 Sam Baird said his first Crucible experience has left him eager to sample the atmosphere again.

Baird, 24, never recovered from a slow start in his match against world number eight Stuart Bingham and lost 10-2.

The world number 83, who had to win four qualifying rounds just to reach the World Championship, said: "I'd like to come back and have another go.

"It was tough to get here and hopefully I can get back. It's a great place to play," he told BBC Sport.

Baird, from Devon, admitted he did not do himself justice in the first-round tie and was unable to replicate the sensational form that saw him reach the home of snooker.

His four victories in qualifying included a stunning 10-3 success over former world semi-finalist Joe Perry in the final round.

"I felt alright so I was disappointed I couldn't turn that into a bit of a better performance," he said.

"There were nerves but not as many as I thought.

"It's not like any other place to play. The atmosphere is a lot better and much different. People are very close and there is not much room around the table."

Baird was 8-1 behind after the first session and said that left him with very little chance of salvaging anything.

"I just wanted to try to enjoy it and hopefully get a few frames on the board and then you never know," he said about the second session.

"But I lost the first one and then it was uphill from there and I was just trying to prolong it as much as possible.

"He started to miss a few after I won my first frame (on Wednesday) and I could have nicked at least one of the last two frames.