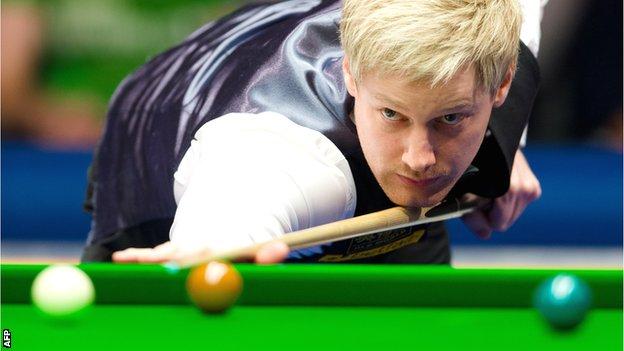 Former world champion Neil Robertson captured his first title of the season with a 10-6 win over new world number one Mark Selby in the China Open final.

The Australian left-hander, who won the world title in 2010, had lost three other finals this season, including the Masters to Selby, and two semi-finals.

But he built a 6-1 advantage at the interval before Selby claimed the next three frames after the resumption.

Robertson halted the charge with a 110 and went on to a seventh ranking title.

It was the 31-year-old's first major win since the 2012 Masters, and first ranking victory since the World Open in September 2010, although he has also won a European Tour event in Poland this season.

He moves above Judd Trump to number two in the world rankings and will now head to Sheffield full of confidence for the World Championship starting on 20 April.

Selby, too, will also start as one of the favourites having gone back to the top of the rankings with his performances in Beijing, and already won four events this season including the UK Championship and Masters.

"I was poor in the first session and Neil capitalised on my mistakes," said the 29-year-old, who has now lost six of his nine ranking finals. "I'm really proud of the way I fought back in the second session. I put up a good fight but it just wasn't to be in the end."

Selby took the opening frame of the final but breaks of 50 and 91 saw the momentum turn in Robertson's favour and he won the next two frames on the colours.

The first session should have been comprised of nine frames but it was reduced to seven by tournament organisers because of the elongated nature of the play.

It was Selby who benefitted from the interval, compiling breaks of 85, 121 and 66 to begin one of his trademark comebacks.

But Robertson settled by taking the next three frames, moving to within one of the match with a composed 90 in frame 13.

Selby, who beat Robertson in the last eight of the UK Championship, averted defeat with a break of 116, the 288th century of his career, and a run of 63 in the next reduced this deficit to three frames.

As the match time ticked beyond the six-hour mark, the 16th frame was re-racked and a fine long red led to a break of 45 for Robertson.

Selby, needing two snookers, continued to battle, but Robertson was finally able to celebrate with a fist-pumping roar after becoming the 10th different winner in as many ranking events this season.