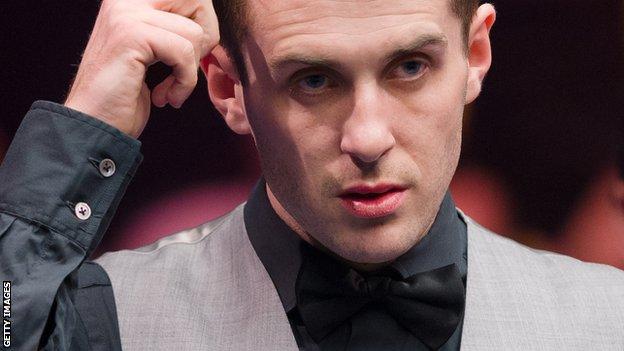 Mark Selby missed the final black on a maximum 147 attempt but still breezed past Mark King 5-1 to reach the second round of the China Open.

The UK and Masters champion, leading 2-0, appeared set for only the second competitive 147 of his career after a superb positional shot on the last red.

But the final black rattled the jaws and he missed out on a £23,500 bonus.

"I left myself a really tough black," he said later. "It wasn't nerves, it was just a tough shot and I missed."

The world number eight fought back from 4-0 down but was beaten 5-3 by Barry Hawkins, ranked 14.

Ding follows John Higgins, Judd Trump and Matthew Stevens out of the ranking event, the final one before the start of the World Championship on 20 April.

Welshman Mark Williams, who has slipped from three to 11 in the rankings after a poor season, beat Chinese 15-year-old Lu Haotian 5-2 to book a meeting with Ali Carter.

Walden overcame former world champion Ken Doherty by the same score, while Mark Davis - battling with Carter for the last automatic spot at the Crucible to avoid having to qualify for the World Championship - beat Dechawat Poomjaeng from Thailand 5-3.

Davis next plays Jack Lisowski, who beat world number one Trump on Tuesday.