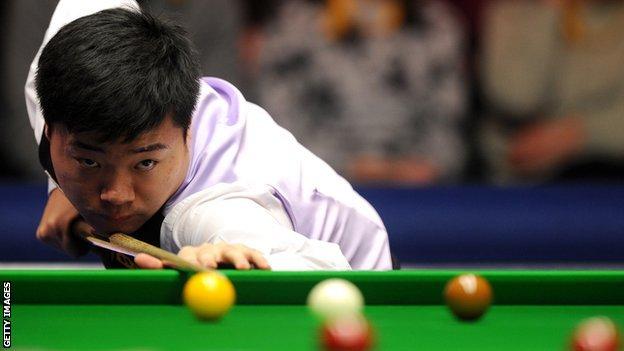 China's Ding Junhui fought back from 3-0 down to beat Neil Robertson 4-3 and win the Players Tour Championship Grand Finals in Galway.

Ding, who in the quarter-finals, watched as Australian Robertson reeled off breaks of 88, 80 and 72 in the first three frames.

But Ding cut the deficit with a 70 and really found his form when making it 3-2 with a 130 break.

The world number nine levelled in a tight frame and won it with a 98 break.

"I have played well all week," Ding told the World Snooker website. "It was very tough because I had to win four matches in the last frame.

"I have taken my chances, made big breaks and fought back in matches. I have more experience now and I know I can win close matches with just one chance. It's all about thinking, and keeping my concentration.

"I have been working hard all year. I might have a few tournaments when I don't play well and have less energy, but I know I can come back strong."