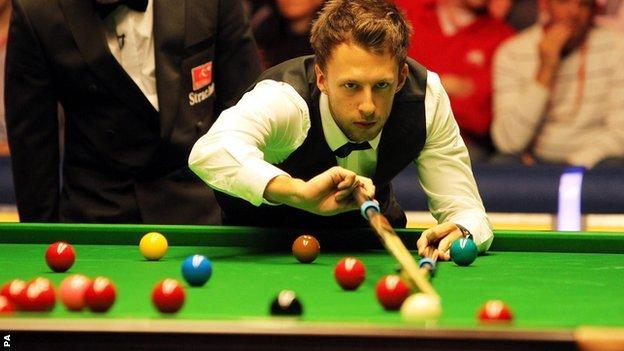 World number two Judd Trump staged a superb comeback to defeat Barry Hawkins 6-5 in the first round of the Masters.

Trump responded with a break of 105 and also won the 10th, and he needed just one chance in the last to triumph.

Shaun Murphy beat Ricky Walden 6-4 to go through to the quarter-finals where he will face John Higgins.

"A match brimming with quality and drama saw Judd Trump battle back from the brink to keep his Masters hopes alive. Barry Hawkins played superbly, he scored heavily and bossed the tactical exchanges but on the cusp of a famous win he could not quite handle the pressure. He missed two clear-cut chances to clinch victory and Trump made him pay. No wonder Hawkins declared himself "sick as a pig" afterwards. Tournament favourite Trump now faces Graeme Dott for a place in the semis."

The Sale potter had gone 4-1 ahead which included breaks of 79 and 130, but Walden took three in a row to level.

However, Murphy clinched the next two to seal the win and keep his hopes of a maiden Masters title alive.

Trump will face Scotland's Graeme Dott in the quarter-final after he beat countryman Stephen Maguire 6-5.

Earlier, a relieved Trump told BBC Sport after his narrow victory: "Barry scored pretty heavily today and I don't know how I have turned it around. I kept breaking down and the nudges were not happening for me today but I am glad to get through.

"The UK Championship was bad for me. Maybe I went in too confidently but whoever you play here at the Masters, it will be a tough game.

"I still don't see myself as the favourite. Every tournament I play in, I see John Higgins as the favourite. Some people get carried away and knock down what I have done, I am still young and still have a lot to learn."

Having gone out in the first round of the UK Championship to Mark Joyce last month, Trump looked to be heading the same way in this, but kept his composure to clinch the last three frames.

Hawkins has never reached a Masters quarter-final but had two opportunities to claim victory against Trump.

A poor shot on the blue enabled Trump to force a decider and Hawkins's break off in the final frame was to be his last shot, as Trump stroked in a magnificent 107 to go through.