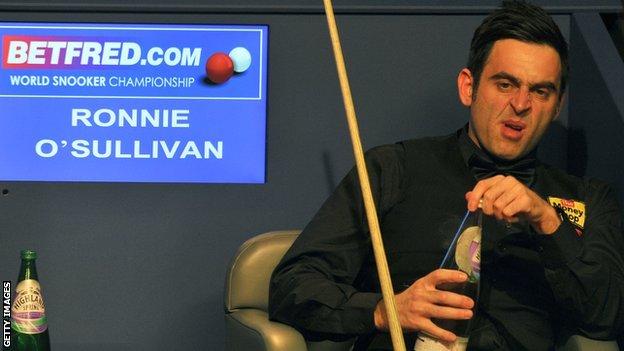 World champion Ronnie O'Sullivan has dropped out of snooker's top 16 rankings for the first time since he entered the game's elite 19 years ago.

His fall to 17th is down to his initial refusal to sign a players' contract.

O'Sullivan missed the Shanghai Masters, the Australian Open and the Wuxi Classic during his self-imposed exile.

The 36-year-old eventually agreed a players' contract in August and is set to feature at the International Championship in China next month.

Despite dropping out of the top 16, O'Sullivan is able to take part in China because he is automatically seeded second as a result of his May Crucible win, when he captured his fourth world title with an 18-11 victory over Ali Carter.

The Essex cueman stalled over signing a players' contract in June, saying it was "too onerous", and made himself ineligible to participate in any World Snooker-sanctioned event.

But, after an eight-week break from the sport, he signed the terms and returned to action at this month's Players Tour Championship, where he was beaten by world number 76 Simon Bedford.

Mark Selby remains top of the world list, with Judd Trump second and John Higgins rising to third after his victory in the Shanghai Masters.