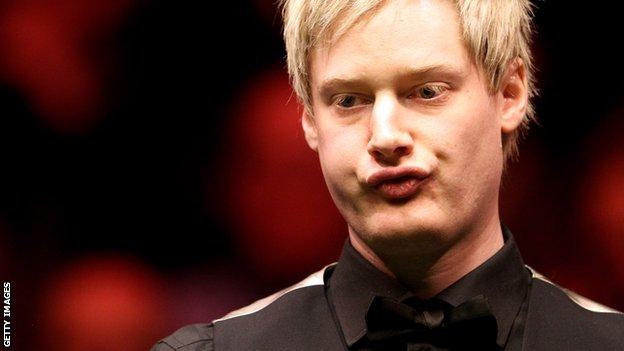 Home favourite Neil Robertson suffered a surprise defeat to Mark Davis in the second round of the Australian Open.

The Englishman fought back from losing the first frame to record a 5-1 victory and set up a quarter-final with Martin Gould, who beatChina's Cao Yupeng 5-4.

Peter Ebdon defeated Ding Junhui 5-4 to set up a meeting with Shaun Murphy.

The 2002 world champion prevailed in a match which lasted four hours and 50 minutes, with China's Ding forcing a decider after winning on a re-spotted black only for the Englishman to take the deciding frame with a 70 break.

In the same half of the draw, Marco Fu of Hong Kong also confirmed his place in the last eight, where he will meet Stephen Lee, with a 5-1 victory over Scotland's Jamie Burnett.

Barry Hawkins claimed a comfortable 5-2 win over Matthew Stevens to book a meeting with Matthew Selt, who emerged a 5-3 victor from his own Anglo-Welsh contest with Ryan Day.