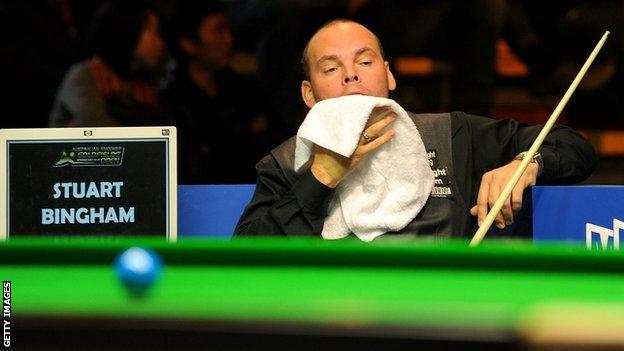 Matthew Selt caused a major shock by knocking holder Stuart Bingham out of the Australian Open with a 5-4 victory in the first round of the tournament.

Bingham had taken a 2-0 and 4-3 lead, but a battling performance from Selt saw him claim the last two frames.

Neil Robertson, playing in his home event, eased past Nigel Bond 5-1 to take his place in the next round.

World Championship runner-up Ali Carter is also out after suffering a 5-3 loss to China's Cao Yupeng.

It caps a disappointing couple of weeks for Bingham, who lost in the final of the Wuxi Classic to Ricky Walden, and falls at the first hurdle in the event he won last year against Mark Williams.

The Basildon potter was unable to get into his stride during the match, coming up against a determined Selt, who is aiming to better last year's achievement of reaching the quarter-finals.

Selt at the Australian Open in 2011

Selt started the match confidently, winning the first two frames which included a break of 55, his highest in the match.

Bingham took four of the next five to gain control but Selt levelled the match to force a decider.

The world number 12 was favourite to win, having triumphed in the final frame in all of his wins at the Wuxi Classic, but there was no repeat as his opponent ground out a victory to set up a clash against Ryan Day.

Meanwhile, Robertson was untroubled against Bond, but there were problems for Carter who was unable to turn around the match against Cao after falling 4-0 behind.

Shaun Murphy, Stephen Lee and Peter Ebdon all edged through to the second round.

But seven of the top 16 including Judd Trump, Mark Williams, John Higgins, Stephen Maguire and Ronnie O'Sullivan decided not to enter the tournament.