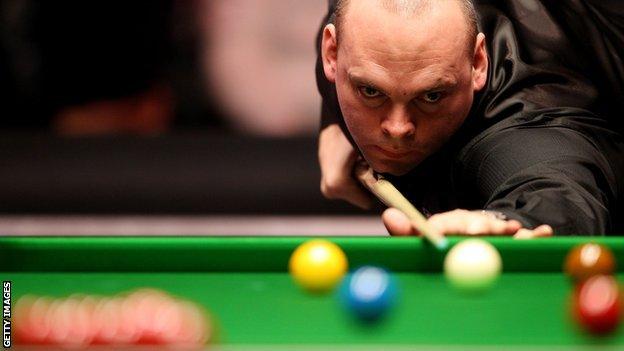 Stuart Bingham advanced into the Wuxi Classic semi-final after a 5-4 victory over world number one Mark Selby.

Bingham had led 4-2 before Selby pulled two frames back to force a decider and the world number 16 completed a match-winning break of 86 to go through.

He will face Mark Davis who trounced Graeme Dott 5-0.

Marcus Campbell beat Mark Williams 5-3 and Ricky Walden defeated Robert Milkins by the same scoreline to set up the other semi-final clash.

"Again it was a great match with Mark. I didn't think he played that well, he's obviously just started the season so he's a bit rusty," said Bingham.

"I potted a good long one in the last and split the pack up and they opened up lovely and I just kept myself together in the end."

Selby had won the event last year, as an invitational event, and admitted his opponent had been the better player.

I for one haven't played that much. So a dark horse could win it

Bingham had been beaten by Selby in final-frame deciders on three previous occasions, and opened up a 3-1 advantage with breaks of 63 and 110.

A 64 from the Leicester man reduced the arrears, but Bingham went one away from victory. He could have taken the match, but missed a match ball red to the middle pocket. Selby took the frame and drew level in the next with a 92 break, but Bingham was not to be outdone as a composed 86 gave him victory.

His opponent in the next round, Davis, secured an easy passage into the semi-final, his first ever in 21-years as a professional player.

Davis did not have to make a single break above 50 to overcome 2006 World Champion Dott.

Commenting on the number of shocks in the tournament so far, Dott said: "There are lots of players who probably haven't practised as much as they should. I for one haven't played that much. So a dark horse could win it."