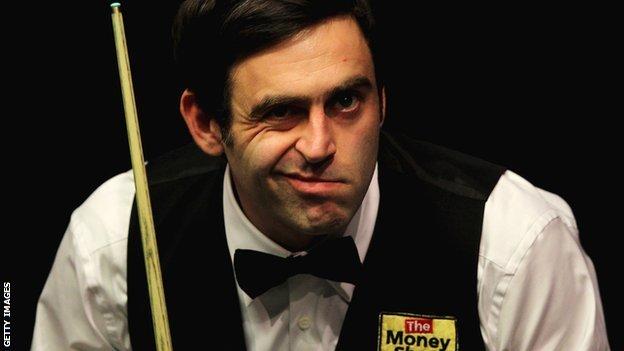 Three-time winner Ronnie O'Sullivan has been drawn against 2002 champion Peter Ebdon in the first round of the World Snooker Championship.

Ebdon has beaten O'Sullivan twice in Sheffield, won last month's China Open and beat Alfie Burden 10-0 in the final round of qualifying for the Crucible.

Much of the attention before the draw was on 17-year-old Belgian starlet Luca Brecel, ranked 87 in the world, who will become the youngest competitor in Crucible history.

And he has a stern task, coming up against Scotland's Stephen Maguire, a winner of four ranking events during his career.

But the most intriguing tie of the first round is world number 13 O'Sullivan versus old adversary Ebdon.

Ebdon, the world number 21, left O'Sullivan frustrated by his slow tactics during a famous Crucible quarter-final in 2005, which Ebdon won.

Youngest players at the Crucible

"People can say what they like but I don't care. When I'm trying my hardest I seem to go slow. I don't do it intentionally," said Ebdon, a three-time finalist, of that victory.

Ebdon also beat O'Sullivan in the semi-finals in 1996, while O'Sullivan beat Ebdon in the quarter-finals in 2001.

O'Sullivan-Ebdon will take place over afternoon sessions next Monday and Tuesday. Higgins will begin his campaign at 10am on Saturday, day one of the tournament.

Bingham upset Hendry, when the Scot was defending champion, 10-7 in the first round in 2000.