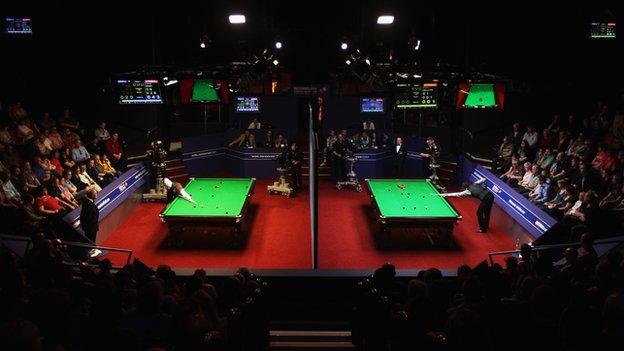 The World Snooker Championship begins on Saturday, 21 April, with 32 players hoping to survive the 17-day "marathon of the mind" - as commentator Clive Everton calls it - and be crowned Crucible champion on Bank Holiday Monday, 7 May.

Here we highlight the main contenders, and BBC analyst John Parrott, the 1991 champion, gives his verdict. 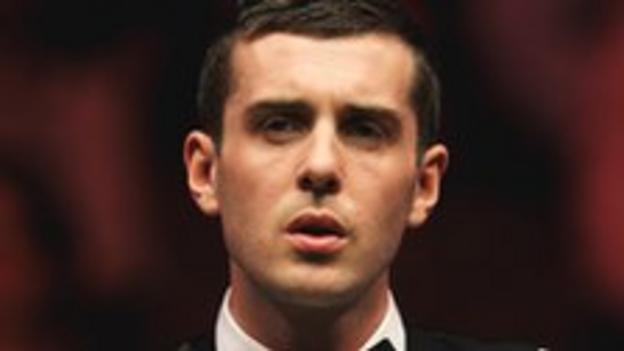 Crucible form: Reached the final in 2007, only to be beaten by John Higgins. In six other appearances at the Crucible, has made one semi-final and two quarter-finals, including last year's 13-10 defeat by Ding Junhui.

Season to date: Consistency has taken Selby to the top of the world rankings, the two-time Masters champion only twice failing to make the last eight in ranking events. Won Shanghai Masters, reached Welsh Open final, semi-final at World Open. Also won Wuxi Classic, a non-ranking event, and one PTC.

Parrott's prediction: "He probably played some of the best snooker I have ever seen at the Crucible not to win when he lost to John Higgins in the 2007 final. Undeniably suited to the way games are played at the Crucible, he is very fit and looks after himself, which is a big thing now. His winning was done early in the season so he is coming in fresh - you don't need to be in the winner's enclosure too close to the Crucible. He is definitely a contender." 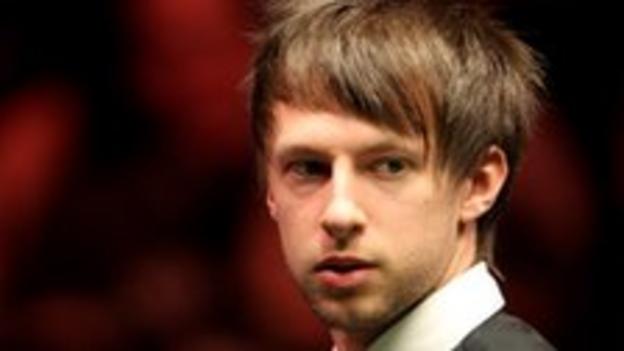 Crucible form: Fell in the first round in 2007 and had to wait until last year for his next trip to Sheffield, but announced his return by defeating defending champion Neil Robertson in round one. Went all the way to the final, and led John Higgins 12-9, but eventually lost 18-15.

Season to date: Won the UK Championship in December, and followed that up with quarter-final appearances at the German Masters, Welsh Open and China Open, as well as reaching the last four at the Masters. Also won two PTC events.

Parrott's prediction: "He has an outstanding chance. He got great experience being in the final last year when - arguably - he missed his chance to win when John Higgins wasn't at his best, but was still experienced enough to get over the line. Judd will have a lot more about him this time, and if he gets on a roll, he will take some stopping." 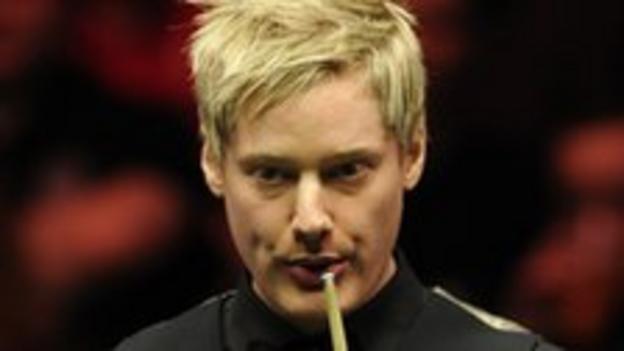 Crucible form: Became the only Australian in the modern era to be crowned world champion by winning the title in 2010, needing to beat only one top-16 player on the way. Only managed one semi-final and one quarter-final in six other visits to the Crucible, and lost in the first round as defending champion last year.

Season to date: Won the Masters in January, and a PTC in Poland, but his record of winning every major final he had reached ended with defeat by Stephen Lee at the PTC Finals. Has also made two ranking semi-finals, as well as last eight of the China Open earlier this month.

Parrott's prediction: "He has an absolutely major chance. I was incredibly impressed with the quality of his match-play when he won the Masters in January, when he wasn't at his best scoring-wise, but his all-round quality of match-play was outstanding. No shot was wasted. Every shot had a purpose. It was very [John] Higgins-esque. A winner over the Crucible course and distance already, Neil is a typically gritty Aussie competitor.

Crucible form: The first left-hander to win the title in 2000, Williams repeated the feat in 2003. A slump saw him reach only one quarter-final over the next seven years, but he re-emerged in 2011 with a run to the semis before being beaten by John Higgins.

Season to date: Lost final-frame deciders (to Stuart Bingham and Mark Selby respectively) in the finals of the opening two ranking events, the Australian Open and the Shanghai Masters, after leading in both. Since then, has only once made it past the last 16 of the ranking tournaments.

Parrott's prediction: "He made a fantastic resurgence after falling out of the top 16 and produced some great snooker to look like he was back to his best, and even got back to number one at the end of last season. Unfortunately he hasn't carried that on this season and needs to improve to have any chance of holding up the trophy." 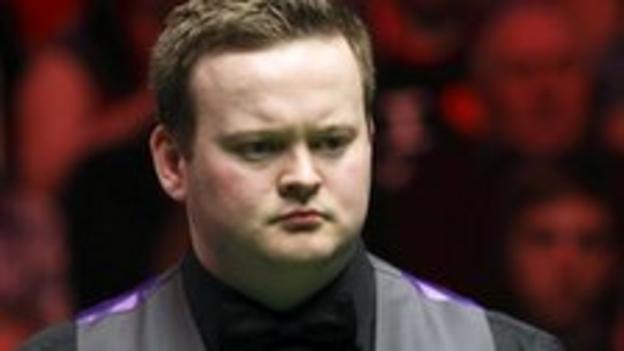 Crucible form: Won the title as an unknown 22-year-old in 2005, the first qualifier since Terry Griffiths in 1979 to do so. Has performed well in Sheffield since then, only twice failing to make the last eight, including a run to the final in 2009.

Season to date: Reached three semi-finals and three quarter-finals in ranking events, as well as Masters final, and won the non-ranking Brazilian Masters. However, did not qualify for the Players Tour Championship Finals, and lost to Lu Ning in the first round of the China Open.

Parrott's prediction: "He is a former winner with a laser-like cue action. He is certainly qualified in the scoring arena, but he is sometimes found out by absolutely tip-top match players concerning his safety play. But there is no doubt he is a definitely a runner in this year's race." 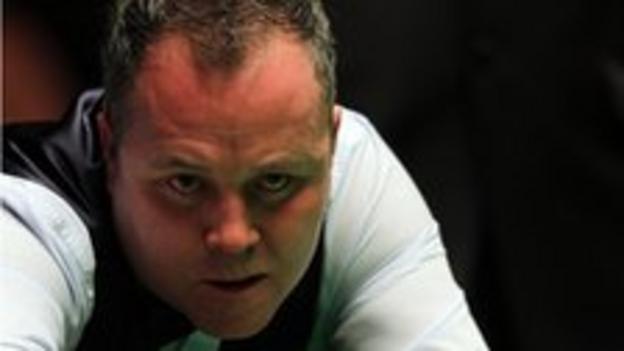 Crucible form: Only Stephen Hendry, Steve Davis and Ray Reardon have won more than Higgins's four world titles in the modern era. Had to wait nine years to add to his first success of 1998, but has since won three of the last five World Championships, the latest of which came last year after a six-month ban for bringing the game into disrepute.

Season to date: A lean year for the defending world champion, who has only twice reached the last eight of the ranking tournaments. Reached the semi-finals of the Masters in January, only to be beaten by Shaun Murphy.

Parrott's prediction: "A surprisingly empty trophy cabinet this year, but he is not a player who strikes me as being suited to the shorter-frame format we see in a lot of tournaments throughout the season. His high-quality match play and percentage play always makes him a feared opponent in the longer-frame format. Four times a winner, so he can never be discounted in the cauldron of the Crucible." 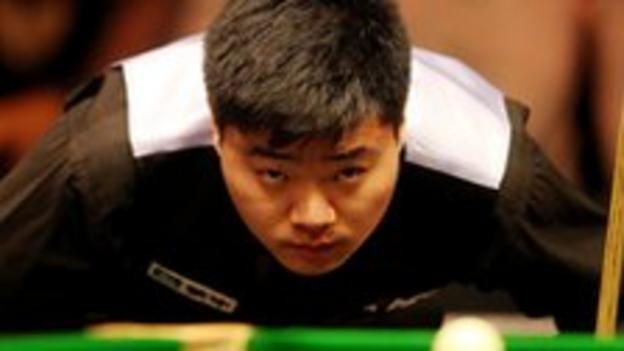 Crucible form: Has often struggled to produce his best form in his five visits to the Crucible, but reached the quarter-finals in 2010 and went a round further last year before losing to Judd Trump in a classic semi.

Season to date: Won the Welsh Open in February, but has been knocked out in the first round of four ranking events. However, a run to the semi-finals of the China Open earlier this month suggests an improvement in form in time for Sheffield.

Parrott's prediction: "He played exceptionally well at last year's championship [when he reached the semi-finals], probably the first time at the Crucible he has shown his true form. He actually had an awful record in the event until then. People who have reached the semi-finals and had their best performance sometimes end up coming back the following year and winning, and Ding could fall into that category. He has a major chance." 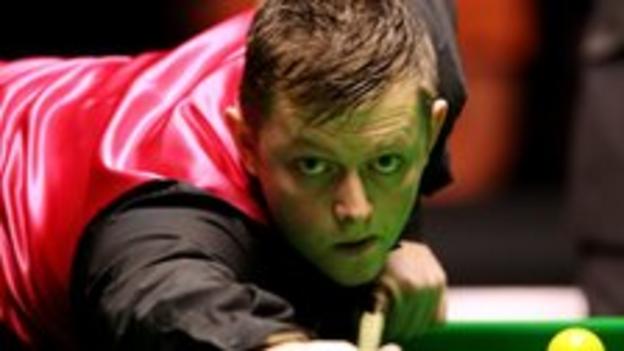 Crucible form: Reached the semi-finals in his third World Championship in 2009, beating defending champion Ronnie O'Sullivan in the second round. Has made the last eight in the last two years, including making the first 146 break in Crucible history in 2010.

Season to date: Eventful, on and off the table. Criticised World Snooker chairman Barry Hearn for shortening the UK Championship, then said the conditions at the World Open in China were "horrendous". Nevertheless, he reached the final of the UK and won the World Open, his first ranking title.

Parrott's prediction: "He has always been an exceptional player with a very decent Crucible record. The one thing missing from his CV was a ranking tournament victory. After winning the World Open last month, he should have the confidence - which was the final ingredient - to become a genuine contender. No-one will fancy playing him this year."

Crucible form: Perhaps the most talented man to grace the Crucible - he is the only player to hit three World Championship maximums. Some argue "The Rocket" should have won more than his three world titles. In 19 visits to Sheffield, he has also reached the semi-finals on five occasions, but has not got past the last eight since his last world crown in 2008.

Season to date: O'Sullivan's position in the top 16 was under threat until he won the German Masters in February, his first ranking title in more than two years. Also reached the semi-finals of the Welsh Open, the last eight at both the Masters and the China Open, and won two PTC events.

Parrott's prediction: "He looks like he has his appetite back for competitive play, and I am glad to see it. If he had dropped out of the top 16, it would have made a mockery of the rankings. The most talented player ever to hold a cue, in my opinion. The only question mark is whether he can hack 17 days at the Crucible and the effort it requires to stay there for that period of time. If he wants to win, he can win."