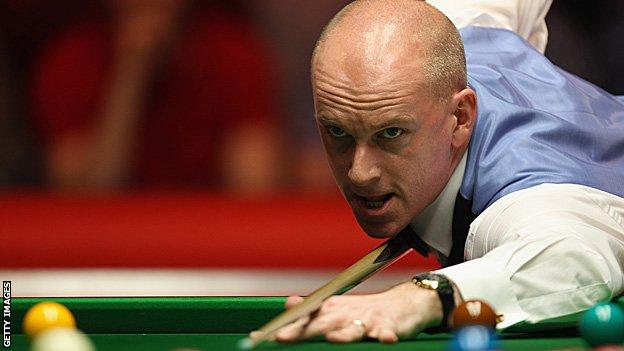 Qualifier Peter Ebdon came from behind to shock home favourite Ding Junhui and reach the final of the China Open.

The Englishman trailed 3-1 at one stage but responded in impressive fashion, eventually taking the match 6-3.

Ebdon, who won the tournament in 2009, will battle it out with 2008 champion Maguire in a best-of-19 frames contest.

China's Ding would have been a popular finalist in Beijing but, after dominating the early exchanges, he was outplayed by 2002 world champion Ebdon, with the match hinging on a nail-biting seventh frame.

After levelling the scores at 3-3, Ebdon took the lead when, with just three colours remaining, Ding missed a straightforward blue to the middle while trying to force position on the pink.

Ebdon potted the blue and then brilliantly cut the pink in from a narrow angle, while still managing to get position on the black at the end of a 37-minute frame.

A break of 68 was enough for Ebdon to take the eighth, before he sealed victory with runs of 64 and 58 to take the decisive ninth frame 127-0.

Maguire could have been jaded after his dramatic 5-4 win over Ronnie O'Sullivan in the quarter-finals, a victory achieved following a re-spotted black.

But he started strongly, moving into a 2-0 lead against Lee, only to be pegged back to 2-2 at the interval, before responding to take the next four, clinching his place in the last two with a break of 91.

It is the second time he has reached the final of the Beijing tournament and his progress rarely looked in doubt after an opening-frame break of 76. He then edged a scrappy second.

Lee looked to have built some momentum as he levelled the match at 2-2 but Maguire responded with breaks of 53, 51 and 66 to win the next two.

A 48 from Lee in frame seven offered hope of a reply but he faltered and Maguire cleared to lead 5-2. Boosted by that effort, the Scot recorded his highest break of the match to book his place in the final.