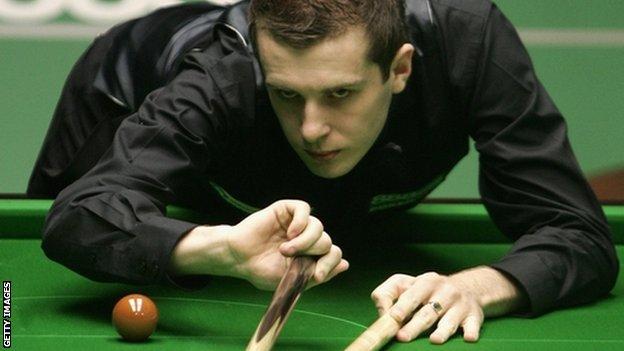 Mark Selby has withdrawn from the China Open with a neck injury.

The world number one had been due to play Ding Junhui in the last 16 but is returning to England for treatment.

"I struggled through my first-round match and I don't want to do any more damage, especially with the World Championship coming up," he said.

World number two Williams has not beaten O'Sullivan for 10 years and missed an opportunity to level the tie at 2-2.

O'Sullivan, who now leads their head-to-head meetings 23-7, will meet the Welshman again in the second round of the World Championship if both players win their first-round matches.

Stephen Maguire will face O'Sullivan in the quarter-finals after coming through a tight encounter against Ricky Walden 5-4.

Higgins got the snooker he required to stay in the match but world number 28 Ebdon held his nerve to claim victory.

He will play Neil Robertson in the quarter-finals after the Australian won the final two frames to beat Stephen Hendry 5-3.

Chinese 18-year-old Lu Ning was unable to add to his shock win over Shaun Murphy in the first round as he went down 5-1 to Ali Carter, who will play Ding for a place in the semi-finals.