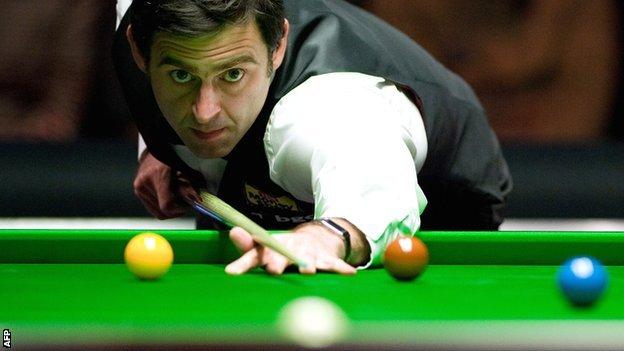 Former world number one Ronnie O'Sullivan recovered from a perilous 4-0 deficit to beat Andrew Higginson 5-4 in round one of the German Masters.

The 36-year-old has slipped to 16th in the world rankings and needs to pick up points to ensure an automatic place in April's World Championship.

Trailing 4-1, O'Sullivan was was within one ball of defeat in frame six, before a 56 helped him win the deciding frame.

Higgins had a top break of just 33 in the second-round match as he was beaten 5-0 for the first time since Karl Burrows routed him in the 1996 Asian Classic.

Maguire, who recorded breaks of 74, 89 and 52, said: "In the first frame we both had chances, and after that I played well. To beat John any time is great for my confidence."

I don't want to comment on the rankings, it would just be nice to win a tournament

O'Sullivan, without a ranking title since the 2009 Shanghai Masters, was in all manner of trouble after losing a safety battle on the pink to trail 4-0 at the mid-session interval.

After reducing the gap to 4-1 with a break of 86, O'Sullivan looked to be heading out when Higginson compiled 63, but he ran out of position and The Rocket made a superb 67 clearance.

A break of 60 made it 4-3 and, after Higginson missed two clear chances, O'Sullivan recorded a 66 to level the match.

In the final frame, O'Sullivan potted seven reds with blacks before missing on 56, but Higginson's chances were ended when he missed a mid-range red on 20 and O'Sullivan added 48 to secure victory.

"Andrew played well and I was lucky to win," O'Sullivan admitted. "At 4-0 down I hadn't done a lot wrong. It was a great atmosphere and I enjoyed the comeback. I don't want to comment on the rankings, it would just be nice to win a tournament."

He will now face Joe Perry, who beat Ali Carter 5-4, in the second round.

Carter came from 2-0 and 3-1 down to level against Perry, and moved ahead for the first time at 4-3 after a 129, the highest break of the tournament so far.

However, Perry captured the final two frames, edging a scrappy decider, to progress.

World number one Mark Selby inflicted a 5-0 whitewash on China's Liu Song and will face Graeme Dott, who also went through without dropping a frame at the expense of James Wattana.

Tour rookie Yu Delu caused a major upset by knocking out Ding Junhui, racing into a 3-0 lead and holding on to clinch a 5-3 victory.

World number nine Ding has had a disappointing season to date and was again far from his best in Berlin where breaks of 68 and 56 carried Yu, 73rd in the rankings, to victory.

There was no such surprise as Judd Trump cruised through his opening match, thrashing Pickering's Paul Davison 5-1.

Davison won a wild-card match to reach the opening round but was outclassed by UK champion Trump, who enjoyed breaks of 50, 75, 60 and 81.

Mark Allen, looked to be on his way out against Tom Ford, but he recovered from 4-1 down and then when needing a snooker in the decider.

Trump later returned to play Allen, the man he and recorded a 5-2 victory.

The Bristolian led 2-0 and 3-1, although his top break in the contest was a relatively modest, by his standards, 79.

The 22-year-old left-hander came from 47-26 down to take frame seven and the match, and will play Maguire in the last eight.

Also through to the quarter-finals is Shaun Murphy, who beat Ricky Walden 5-2.

Walden claimed successive frames but Murphy duly secured a meeting with the winner of Selby's match against Dott.