The lights remain off. The ice has long since thawed out.

This was meant to be a season of celebration for Glasgow Clan. A year to commemorate their first decade in existence, having risen from nothing to become the fastest growing sports club in Scotland.

Yet, in a week when the National Hockey League skated back into action across the Atlantic, clubs in the Elite League remain in cold storage because of the ongoing impact of Covid-19, yearning to take to the ice once more.

BBC Scotland takes a look at the rise of Glasgow's only professional ice hockey team and what an uncertain future holds looking forward while glancing proudly into the past.

'Hockey is a sport that, without fans, cannot operate'

"Like any other sports organisation, it's been quite a devastating time. Not only financially but also for the culture of the club. We've lost that momentum and had to quickly adapt to the bigger picture that threaten the future of the club. That has been extremely difficult after all the years of hard work we've put in here. Our fans and sponsors have been outstanding since the end of last season and that's helped us sustain the club ready to return when the situation allows."

Clan general manager Gareth Chalmers is honest when asked about the impact of the pandemic on the club, one of three professional outfits in Scotland.

In the UK, ice hockey relies heavily on ticket sales to operate, meaning clubs need at least 75-100% capacity in venues to cover overheads. In other words, without the fans, there's no sport.

It's also a supporter experience like no other. Huddled inside with only a sheet of Perspex glass separating you from the action, music, air horns, competitions and, in the case of Clan, a dancing Highland cow, all add to the spectacle.

Clan have pounced on the gap in the market for family entertainment. From a small fan-base of 100 season ticket holders in 2010 under the name of Braehead Clan to weekly crowds of more than 3000 flocking to their arena on the banks of the River Clyde.

"It was a stable club when I arrived in 2013," Chalmers says. "Every single season from year one, we have gone from strength to strength. We always move forward, even if the results on the ice don't always reflect that.

"We'll never go stagnant. If we do, that's when we have a problem."

'You have to enjoy every moment'

There is not much that remains from those early days at a largely-empty Braehead Arena. Even the name of the team changed in 2018.

One ever-present is forward Matt Haywood, the 30-year-old who has been with the club since their very first game in a 5-3 win over Dundee Stars.

The Englishman has seen a plethora of highs with the Clan since their infancy, including making it to the play-off finals for the first time in Nottingham back in 2014. There are also jaunts across the continent in the Champions Hockey League, including a landmark 6-4 win over German champions Ingolstadt.

"Last year made me realise how much I should appreciate it. It's quite a short career, so you just have to enjoy every moment of it," Haywood, who was given a testimonial last year, says.

"My testimonial game in itself was surreal. I remember having a moment where I thought 'there's never going to be this group of guys playing here again with me'." 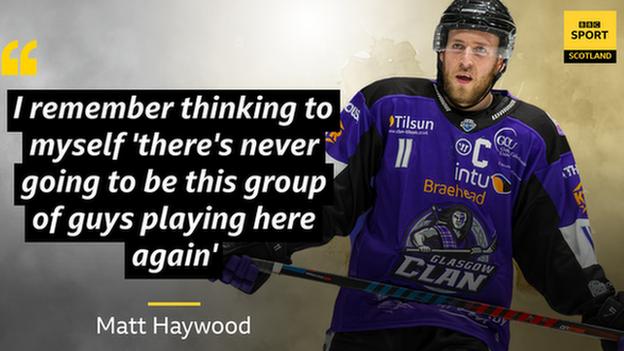 While most football and rugby fans have been forced to watch their teams from their sofa, ice hockey fans have been left with nothing but memories and YouTube videos to get them through until the EIHL returns.

For an active support who thrive on a family atmosphere, it can be a tough period.

"I met a good friend who sat beside me at the arena and I ended up being his best man at his wedding," Clan Supporters Club chairman Roddie Brown recals.

"I started following the Clan at the back end of season two. It was my wife who got me into it. I was apprehensive at first, but we went along with my nephew to a game against Belfast Giants and, with all the excitement, rough and tumble of the game, I was hooked.

"You go into the arena and the fans are singing, the drums are going - but it's family orientated. It's a nice atmosphere. Everyone around you wants to talk to you and get to know you. It's a totally different environment to any other sport I've been a spectator of.

"We believe hockey is a sport for everyone. It's a place where everyone is made to feel welcome and become a part of something."

And for the future?

"We had a strong 10 years and we will have an even better 10 going forward," Chalmers adds.

"When we come back, it will be a totally different looking Clan from top to bottom. We will come back stronger. Our future remains bright."

2010-11 - Braehead Clan formed. First game played against Dundee Stars ends in a 5-3 win under coach Bruce Richardson. Richardson leads team to the highest position of any Scottish team in Elite League history after they finish fifth.

2011-12 - Richardson resigns and is replaced with former NHL man Drew Bannister. The Clan finish sixth in the league.

2012-13 - Another change of coach, Jordan Krestanovich takes the reins before being replaced with Paul Gardner in January 2013.

2013 - By April 2013, Ryan Finnerty takes over as head coach and Braehead Clan move in a new direction. The team win the Aladdin Cup and finish fifth in the league.

2014 - Clan head to their first-ever play-off finals weekend in Nottingham, narrowly missing out with a semi-final loss to Sheffield Steelers. Followed by a third place play-off win over rivals Fife Flyers.

Clan qualify for the Champions Hockey League in Europe, which means trips to Vaxjo Lakers in Sweden and Ingolstadt in Germany.

2015-16 - Clan finish third place in the league and miss out on the play-offs after losing to Flyers.

2017-18 - For the first time in their history, Clan find themselves eliminated from the Challenge Cup, fail to make the play-offs and finish ninth in the league.

GB national coach Pete Russell steps in to the role of head coach. Clan finish fourth, reach the semi-finals of the Challenge Cup and win the Gardiner Conference title for the fifth time.

2019-20 - Clan captain Zach Fitzgerald takes the helm as coach after Russell leaves to join Freiburg. A strong start to the season has Clan at the top of the league before falling to seventh before the season is cut short by the global pandemic.