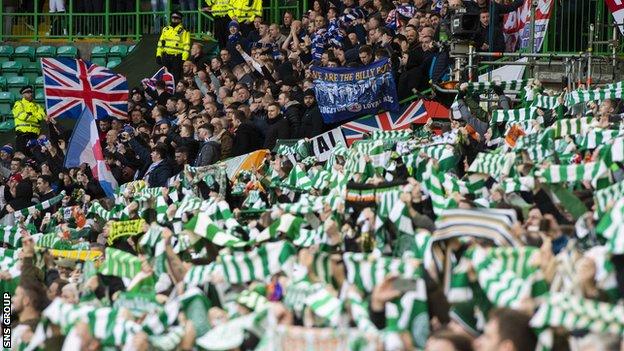 Fans could be allowed into sports events from 14 September, first minister Nicola Sturgeon has announced.

Partial crowds with physical distancing would be allowed initially, with test events allowed to take place earlier with the Scottish government's permission.

Ms Sturgeon stressed that the dates are indicative and subject to review.

The Scottish Premiership season gets under way this weekend without fans present.

Clubs have been keen to get spectators back as quickly as possible, due to their reliance on gate receipts for income.

Celtic chief executive Peter Lawwell called for pilot games and warned Scotland must not be "left behind" when it comes to reintroducing crowds.

Meanwhile, Scottish Rugby have proposed hosting a limited number of fans at Murrayfield, using Glasgow versus Edinburgh in the Pro14 as a test event.

The Scottish FA has plans to do the same for Scotland's Nations League match with Israel in early September.

Ms Sturgeon told MSPs: "We hope that sports stadia will be able to reopen from that day [14 September] for limited numbers of spectators, with physical distancing in place.

"Some professional sports events may be arranged for spectators before then with Scottish Government agreement to test the safety of any new arrangements."

Lawwell said Celtic are "delighted" with the "positive development", adding: "It is our intention to get as many supporters as we can back into Celtic Park as soon as we can, within the guidance.

"However, the safety and security of our supporters is always our top priority, and we will communicate more on this as soon as possible."