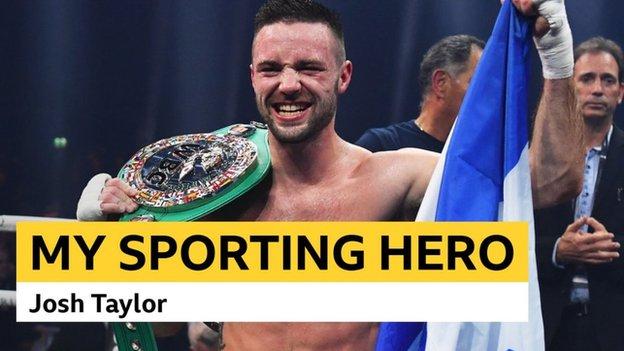 World champion boxer Josh Taylor tells us about his sporting hero, the legendary Italian motorcycle racer Valentino Rossi, and his own lifelong passion for motorbikes.

Most people would think my sporting hero would be a boxer, but the truth is I wasn't really that into the sport before I got involved in it at the age of 14 or 15. I just wasn't interested.

Motorbikes are my first love. I've been around bikes my whole life thanks to my dad. He used to race and there are pictures of me as a newborn at the track.

Dad raced at club level for a few years, at Knockhill in the Scottish Championship and at East Fortune in East Lothian. He did that for a few seasons, but when I came along he had a choice - either buy a box of nappies or a set of tyres for his bike. So I'm to blame for his racing career coming to an end!

We would still enjoy going along to watch racing, though, and probably my two earliest sporting heroes were two Scottish riders, Neil McKenzie and Steve Hislop. I used to go and watch them every year at Knockhill when the Scottish round of the British Superbikes was on.

But when my dad and I would watch MotoGP on the telly, it was when Valentino Rossi was the superstar and I became a huge fan of his. He was the 125cc world champion and then came through on 250cc and the big class as well. He won nine world championships and is one of the greatest of all time.

As well as being a winner he's a real entertainer too, which I love. He always puts on great celebrations. His suits always stood out too and he was always just a level above everyone else. He was my hero.

I'd watch Rossi winning world title after world title, but he wasn't just winning them, he was blowing everybody else away. He was a bit like Marc Marquez is now in the MotoGP Championship - a cut above everybody else. Rossi was just class and great to watch.

And even now he's still up there at the age of 41, at the elite level in motorbike racing. He's racing around with kids that are 19, 20, 21 and still pushing them. His body is bound to be broken at this stage with the amount of crashes he's had, and yet he's still at the top.

'I was peeing blood for a couple of days'

When I was watching Rossi as a kid, I was racing motocross and was pretty good. I was competing in the Scottish Championships and getting top-three finishes out of fields of 40 guys.

But we just didn't have the money to keep it going and stay competitive with the top guys who had sponsorships. They had two bikes plus spares. But if we crashed, that was us out.

I had one particularly nasty crash when I came flying off my bike and did my back in, my liver, my kidneys, everything. I was coughing and peeing blood for a couple of days, but it didn't faze me. I was injured for a couple of weeks and a bit sore, but as soon as I was able to get back out on the bike I did. I just loved it.

To this day, I don't really think there's anything, aside from being in the boxing ring, that comes close to that adrenaline rush you get on the bike. The feeling of the speed and doing the jumps, it's incredible. You just can't get enough, you just want to do it more and more.

You know the dangers, but when you're on the bike, the danger doesn't even enter your head. You're just enjoying the thrill.

I still have a motorbike but it's three years since I've been out on it. I can't risk falling off. The last time I went on it, I was going down the road with my friend and we had a couple of close calls with car drivers not paying attention. After that I put the bike away. I thought it's not worth risking my career for.

But when the day comes when I hang up my boxing gloves, I'll be straight back out on the bike. Who knows, maybe one day I'll get to meet Valentino Rossi and he can give me some pointers. I never really get star struck but I think I would be if I met him. I don't know what I would say.