This week, Olympic gold medal-winning cyclist Callum Skinner talks about Michael Phelps, the American widely considered to be the greatest swimmer of all time. 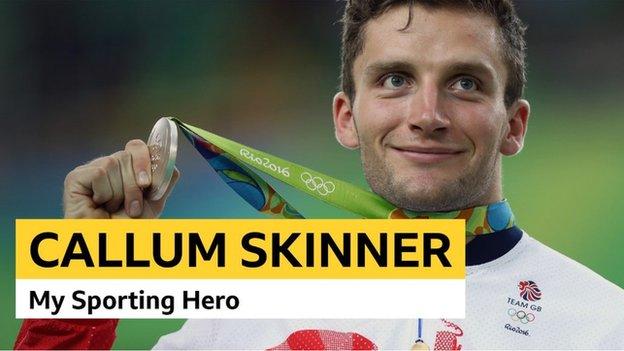 Michael Phelps might be seen as an unimaginative pick. But ever since I became interested in the Olympic Games he has been a towering figure to me, I guess in the same way many football fans would look upon Lionel Messi.

He is the greatest swimmer of all time and, with 23 gold medals, the most successful Olympian in history. But the medals and success are only part of his story. It's his work away from the pool that really sparked my admiration for him.

Many athletes' accomplishments give them a platform, an opportunity to be a force for good. Michael's feats have afforded him a fantastic stage and the way he has used that to drive change has been mightily impressive. He is passionate about issues very close to my heart.

At the London Olympics in 2012, he won four gold medals, taking his tally of those across three Games to 18. He was on top of the world in a sporting sense, but after that he quit and said he wanted nothing more to do with swimming.

He later revealed he had suffered from depression after London. Many athletes have spoken in recent years about their mental health issues and he was one of the first really high-profile athletes to do so publicly.

He's been pretty open about saying he considered suicide, that he had fallen off the rails after multiple Olympics.

I find a lot of resonance in that. I found myself in a very dark place after Rio 2016. Thankfully, and partly due to the work Michael had done in breaking down barriers, I felt as if it was OK to ask for help and I got better.

When I stepped away from cycling last year, I felt safer speaking out about my own mental health issues knowing Michael had walked that road ahead of me. It feels like he's taken a bit of a burden for everyone else.

What he's done is help defuse the situation by saying the world's most successful athlete has struggled and is not immune to mental ill-health. It gives a lot of breathing space to everyone else because you're then not being viewed in a prism of being weak or of not trying or of being lazy.

It validates mental health among athletes as being a legitimate concern which merits attention.

Given the circumstances he had been faced with, to go back into that situation of competing at Olympic Games, knowing you are likely to find yourself in that dark place again, it just shows the magnitude of the man.

He was prepared to push on through and go through that whole cycle again and delivered a further five golds at Rio 2016 having come back out of retirement.

It wasn't something I was prepared to do - I'm not necessarily sure it's something that's wise to do - but he endured it and managed to push through. Probably one of his strongest athletic qualities is that mental endurance but it's quite mind-boggling to think someone would continue to push on through given those circumstances.

He's provided such a great case study and such a personable life message to so many people that success doesn't always bring happiness. More than just being the most successful Olympian of all time, to me what he's been most valuable for in terms of a societal shift is showing that even the world's best can have issues.

'He made me realise you can have worth away from sport'

I also really admire how strong and vocal Michael has been on the subject of anti-doping in sport, something I'm also really passionate about. He's been ahead of the curve on a lot of this stuff. He famously said that he doesn't think he's raced in an event where there hasn't been at least one person cheating.

I think he understands the responsibility that he has to sport. It's given him a lot, it's given me a lot and we have quite similar motives as to why and how we want to see it improved in the future.

We don't want to see the anti-doping system called into question, but unless the governing bodies get a grip of it and put the athletes first - which is what we're all calling for - then little is likely to change.

One of the great things Michael did for me was made me realise that you can have worth as an athlete not just for the results you get in sport but for the work you do after retirement. You can become more well known as someone who can change the face of mental health or help make sport a fairer place, which is what I'm striving for now.

That's the kind of thing that Michael started to do. He realised he'd gained that platform and started to carve out a career that was worthwhile in pursuing these really tough societal issues.

He's there sharing a story from a place of vulnerability and that's something sport and society needs to get a lot better at, especially when it comes to men.