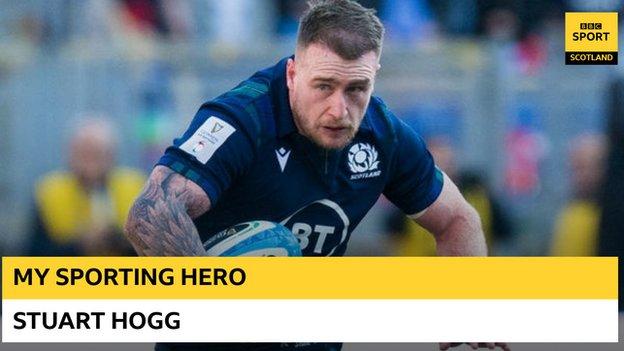 Growing up in Hawick you were either into rugby, football or horse riding. I was fortunate enough to be able to do all three.

At first, I didn't really enjoy horse riding, I was terrified. I remember my mum and dad saying to me that you actually feel safer when you're on the horse because you're meant to be in control. We had horses and ponies growing up and would always go riding. It was a keen interest and I grew to love it.

In my primary seven year book from 2004, we were asked to write down what we wanted to be when we grew up - and I wrote that I wanted to be a jockey.

At the time you're finishing up school you've just finished the common riding, a big tradition in Hawick, and when you're that age you always chop and change what you want to be. One minute you want to be a rugby player when there's rugby on the TV, the next, when you've got horses, you want to be a jockey.

At that time I was absolutely tiny and had a keen interest in both of them, but it soon became clear there was a severe lack of ability when it came to riding horses and holding the weight, so rugby took over.

My passion for horses has endured, though, and when you think of horse racing you think of AP McCoy. I just loved AP, he was the only jockey who always wore the same colours, the green and yellow stripes with the white hat. It soon became apparent that was AP McCoy, and he was the big dog.

I just loved the fact that he was always in the winner's enclosure and just seemed to be at the top of the game all the time.

He was champion jockey for 20 consecutive years, which is just incredible. That's like getting World Rugby Player of the Year every year for 20 years. He always seemed to work incredibly hard and he was always getting the good horses because he was consistent from when he started in 1995 right through until he finished in 2015.

That's a hell of a career to be pushing so many winners - over 4,000 - and have so many individual accolades.

Not everything has gone his way in his career and yet he just continued to get up and go again. People reckon we rugby players have the raw end of the deal when it comes to injuries, but you just need to look at his AP's injury list - numerous concussions, teeth knocked out, broken collarbones, punctured lungs. You name it, he's had it.

You talk about people being hard and just getting on with things. I think he just epitomises everything it means to be a champion. There will be times when everything is going your way and there will be times when you hit rock bottom, but it's about your ability to suck it up and get going again. With the injuries he's had, to get back to being as successful as he has been, I don't think there's been a sportsperson like him.

When I sat and watched AP racing, I would see him have the occasional fall and injury, but more often than not see him in the winner's enclosure.

I had never seen AP behind closed doors - what goes on with the human being - until I watched the documentary Being AP. The amount of arguments him and his wife, Chanelle, used to have in terms of when he was injured - he was almost just biting down on the gumshield and getting on with it, putting his body at further risk. That's what he needed to do to be champion jockey 20 consecutive years.

To be the best you've got to be resilient, work incredibly hard, fight through pain - and for all the sacrifices he's had to make, it's great to see how successful he actually was.

The standout moment for me, the iconic moment of his career, was seeing how much it meant to him to win the Grand National in 2010. It took him 15 attempts and the horse was Don't Push It. I just loved the reaction, he looked like he almost kind of fell off the horse in celebration going over the finishing line.

That's a race he always wanted to win and it took him 15 years to finally get there. It was meant to be. He was coming towards the end of his career and I think it would have killed him not to have won that before he retired. I just loved seeing it, the celebrations and how much it meant to him.

Even now in retirement I just love watching him with his TV analysis. He's such a down to earth guy, he knows what he's talking about and could tell you absolutely anything, and you just believe what he says because he speaks with so much authority.

He's one of those guys that if I were to have the opportunity to meet him I don't know what I'd do or what I'd say. I'm just in awe of everything he's achieved. I'd love to sit down and have a pint with him and just chew his ear off.